Vaccine studies offer new hope as WHO warns on Africa

LONDON — Two studies offered new hope of a potential vaccine for the novel coronavirus on Monday, as the World Health Organization warned about a possible acceleration of the disease in Africa. 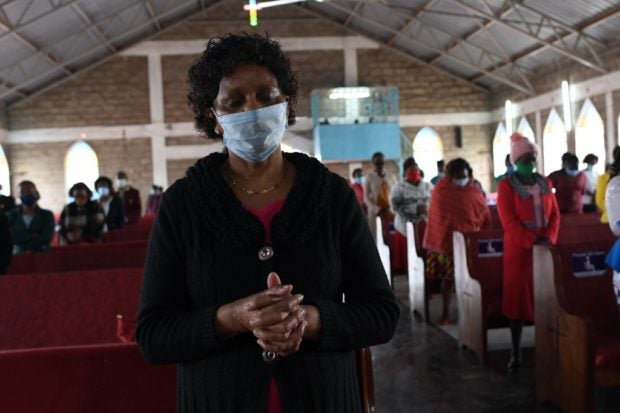 A member of the Presbyterian Church of East Africa (PCEA), Dagoretti Parish, wearing a face mask, prays during a church service, after reopening in strict adherence to COVID-19 protocols from the Government, in Nairobi, on July 19, 2020. Photo by Simon MAINA / AFP

Seven months after COVID-19 was first identified in China and has since killed more than 600,000 people worldwide and battered economies, there is growing alarm over fresh outbreaks of the disease.

Until recently, Africa had remained relatively unscathed by the pandemic compared to other parts of the world.

But the situation has become increasingly worrying, particularly in South Africa, where the death toll passed 5,000 mark and the number of infections reached 350,000 at the weekend.

And the WHO’s emergencies chief Michael Ryan told a virtual news conference in Geneva that the situation in South Africa could be seen as “a warning” for what the rest of the continent might have in store.

“I am very concerned right now that we are beginning to see an acceleration of disease in Africa,” he said.

Meanwhile, as European leaders in Brussels struggled to salvage a 750-billion-euro coronavirus aid package for the EU, two studies published in The Lancet medical journal appear to show progress towards a vaccine.

One trial among more than 1,000 adults in Britain found that a vaccine induced “strong antibody and T cell immune responses” against the coronavirus.

“If our vaccine is effective it is a promising option as these types of vaccine can be manufactured at large scale,” said co-author Sarah Gilbert from the University of Oxford.

British biotech firm Synairgen also said on Monday a randomized trial of an aerosol-based treatment shows it could drastically reduce the number of new coronavirus patients dying of the disease or requiring intensive care.

Europe has been the worst-hit continent by the pandemic with more than 200,000 deaths, but European Union leaders remain bitterly split on how to help member countries like Italy and Spain, which have suffered the highest death tolls, but which have the heaviest debt burdens.

On a fourth day of a summit marked by furious rows between the 27 countries, EU Council chief Charles Michel said Monday he believed a deal was in reach.

“I know that the last steps are always the most difficult, but I’m confident,” Michel told reporters.

“I think that even if it is difficult, even if it will be important to continue to work, I think and I am convinced that an agreement is possible.”

Many countries in the continent had largely brought their outbreaks under control and were considering further easing of restrictions before fresh clusters were detected.

Governments are struggling to balance public health concerns against the need to open up economies crippled by months of virus lockdowns.

France has made face masks compulsory in public indoor spaces, Spain asked millions to stay at home again, while the German state of Bavaria said it would soon offer free virus tests at airports.

Spain’s Catalan regional government has urged residents of Barcelona and its suburbs to leave their homes only for essential tasks in a bid to slow a new outbreak.

French authorities have reported 400 to 500 active outbreak clusters but there are no signs of an imminent “second wave,” Health Minister Olivier Veran said Monday.

But an anti-mask demonstration in London on Sunday highlighted the challenge still facing governments and health experts, despite the mounting COVID-19 toll.

Dozens gathered to protest the face mask requirement in England’s shops and supermarkets, many of them holding banners with widely discredited conspiracy theories — such as coronavirus prevention measures being used for “mind control.”

Despite the vocal and stubborn opposition to lockdowns and face masks in some parts of the world, they remain among the few options for authorities to control new outbreaks in the absence of a vaccine.

There was grim evidence of how quickly the virus can spread over the weekend, with Iran’s president saying an estimated 25 million people in the country have already been infected.

While Hong Kong’s daily case count of 108 on Sunday was far below other parts of the world, city authorities tightened distancing measures further, pointing to the fear of uncontrolled infections.