Democrats ‘gravely concerned’ over foreign interference in US vote

WASHINGTON — Senior US Democrats have demanded an urgent intelligence briefing for lawmakers from the FBI over what they said was a concerted foreign campaign to spread disinformation to interfere in November’s elections. 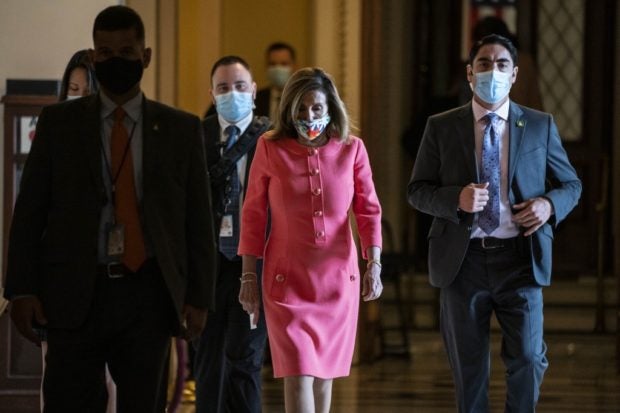 WASHINGTON, DC – JULY 20: Speaker of the House Nancy Pelosi (D-CA) walks from the House floor to her office in the U.S. Capitol on July 20, 2020 in Washington, DC. Sarah Silbiger/Getty Images/AFP

House Speaker Nancy Pelosi, the Senate’s senior Democrat Chuck Schumer and two other Democrats — all with access to high-level intelligence — wrote to the FBI last week in a letter released on Monday.

“We are gravely concerned… that Congress appears to be the target of a concerted foreign interference campaign, which seeks to launder and amplify disinformation in order to influence congressional activity, public debate, and the presidential election,” they said.

They said that due to the nature of the threats, it was imperative that the FBI provide a classified briefing to all members of Congress by the end of July.

Their Republican counterparts notably did not sign the letter, and its release indicated the FBI had not followed through on the request.

The FBI acknowledged Monday receiving their letter, but had no other comment.

Biden vowed in a statement that “if any foreign power recklessly chooses to interfere in our democracy, I will not hesitate to respond as president to impose substantial and lasting costs.”

US intelligence and law enforcement chiefs concluded in 2016 that Moscow had mounted a multi-pronged hacking and social media manipulation campaign to boost Trump and hurt his rival, Democrat Hillary Clinton.

They have also said there were multiple foreign hacker efforts to penetrate voting systems in the 2018 by-elections, as a “test run” for 2020.

Trump has repeatedly denied it, and has downplayed warnings of interference from abroad in the next elections.

This year, intelligence officials have warned especially of disinformation campaigns over social media from Iran, China and Russia.

Earlier this month, FBI director Chris Wray said that China was pushing its preferences in the 2020 US race in a constant effort to influence the American public.

“It’s not an election-specific threat; it’s really more of an all-year, all-the-time threat. But certainly that has implications for elections and they certainly have preferences that go along with that.”

And in February, a senior FBI official monitoring foreign influence, David Porter, warned that Russia was again interfering, seeking to exacerbate divisions and sow distrust in the US election system.

“Russia wants to watch us tear ourselves apart, while it seems that China would rather manage our gradual economic decline over the course of generations,” he told a conference on election security.

Also on Monday, General Paul Nakasone, commander of the US Cyber Command and director of the National Security Agency, said their primary mission was “a safe, secure and legitimate 2020 elections.”

“We’re going to act when we see adversaries attempting to interfere in our elections,” he added.