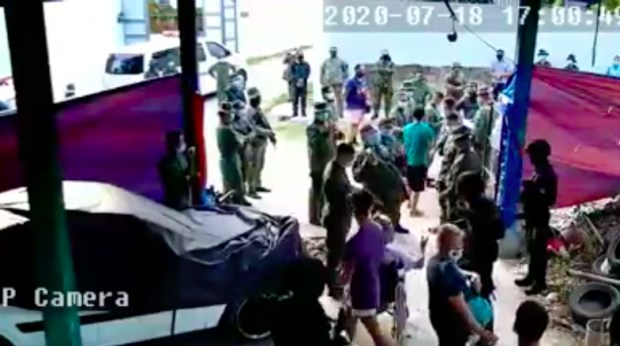 A screenshot from the video posted on Facebook by Arles delos Santos showed NCRPO chief Maj. Gen. Debold Sinas and his men at the Delos Santoses’ compound in Taguig.

MANILA, Philippines — The Philippine National Police will investigate cops from the National Capital Region Police Office, including its chief, Maj. Gen. Debold Sinas, for alleged harassment of a family residing in an old compound in Taguig City.

PNP chief Gen. Archie Gamboa on Monday said the agency will look into how the cops carried out the eviction order on the family of Arnel delos Santos, a former Police Executive Master Sergeant.

“We will investigate how they carried out that order. Of course, alam naman natin na ang video would speak a thousand words, that’s why we will investigate what happened during that confrontation,” Gamboa said in an online press briefing.

In a video posted on Facebook on Saturday by Arles Delos Santos, son of Arnel, several cops could be seen flocking in the premises of the compound.

A cop could also be seen forcefully snatching a phone from a person’s hand to prevent him from taking photos of the confrontation.

Gamboa said the PNP will also investigate the “cellphone-taking” incident.

The Delos Santos family will file criminal and administrative charges against Sinas and the other policemen for allegedly harassing and trying to evict them from their house.