Signs of governments reassessing their coronavirus response were scattered around the world Sunday, with the mayor of Los Angeles saying the city was reopened too quickly, Ohio’s governor warning his state is “going the wrong way,” Hong Kong issuing tougher new rules on wearing face masks and Spain closing overcrowded beaches. 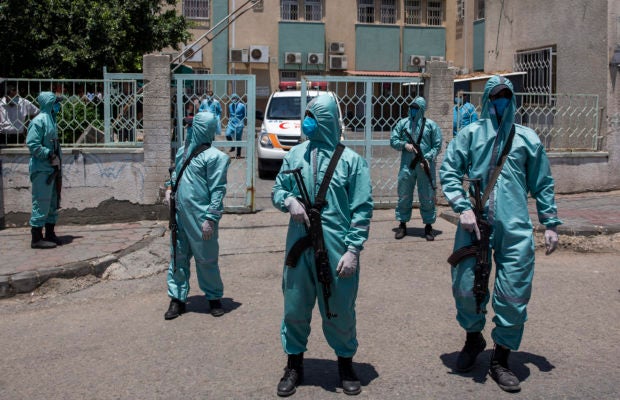 Appearing on CNN Sunday, Garcetti was asked about a Los Angeles Times editorial that criticized the rapid reopening of California, which was followed by a spike in new COVID-19 cases and hospitalizations.

“I do agree those things happened too quickly,” Garcetti said, adding that the decisions were made at the state and county levels, not by city officials. But he also said people in general had become less vigilant about taking precautions to avoid transmission.

“It’s not just what’s open and closed,” he said. “It’s also about what we do individually.”

Infections have been soaring in U.S. states including California, Florida, Texas and Arizona, with many blaming a haphazard, partisan approach to lifting lockdowns as well as the resistance of some Americans to wearing masks.

“We’ve seen a lot of these things turned into sort of a partisan fight or a political statement,” he told South Florida television station, CBS4, on Sunday.

Ohio Gov. Mike DeWine, like Rubio a Republican, said he would not rule out a statewide mandate on wearing masks, as infections in his state grew.

He has already issued such orders in 19 counties accounting for nearly 60% of the state’s population.

Globally, the World Health Organization said that 259,848 new infections were reported Saturday, its highest one-day tally yet. India, which has now confirmed more than 1 million infections, on Sunday reported a 24-hour record of 38,902 new cases.

Pope Francis said “the pandemic is showing no sign of stopping” and urged compassion for those whose suffering during the outbreak has been worsened by conflicts.

In Europe, where infections are far below their peak but local outbreaks are causing concern, leaders of the 27-nation European Union haggled for a third day in Brussels over a proposed 1.85 trillion-euro ($2.1 trillion) EU budget and coronavirus recovery fund.

German Chancellor Angela Merkel said there is “a lot of good will, but there are also a lot of positions” in the talks, which have have laid bare divisions about how the countries hit hardest by the pandemic, such as Italy and Spain, should be helped.

She said the talks, which were initially scheduled to end on Saturday, could still end without a deal.

Confirmed global virus deaths have risen to more than 603,000, according to data compiled by Johns Hopkins University. The United States tops the list with over 140,000, followed by more than 78,000 in Brazil. Europe as a continent has seen about 200,000 deaths.

The number of confirmed infections worldwide has passed 14.3 million, with 3.7 million in the United States and more than 2 million in Brazil.

Experts believe the pandemic’s true toll around the world is much higher because of testing shortages and data collection issues.

Even where the situation has been largely brought under control, new outbreaks are prompting the return of restrictions.

Following a recent surge in cases, Hong Kong made the wearing of masks mandatory in all public places and told non-essential civil servants to work from home. Hong Kong leader Carrie Lam said the situation in the Asian financial hub is “really critical” and that she sees “no sign” that it’s under control.

Police in Barcelona have limited access to some of the city’s beloved beaches because sunbathers were ignoring social distancing regulations amid a resurgence of coronavirus infections.

Slaughterhouses also have featured in outbreaks in the U.S., Germany and elsewhere. Authorities in northwestern Germany’s Vechta county said 66 workers at a chicken slaughterhouse tested positive, though most appeared to have been infected in their free time. An earlier outbreak at a slaughterhouse in western Germany infected over 1,400 and prompted a partial lockdown.

Cases in the Australian state of Victoria rose again Sunday, prompting a move to make masks mandatory in metropolitan Melbourne and the nearby district of Mitchell for people who leave their homes for exercise or to purchase essential goods.

Victoria Premier Daniel Andrews said those who fail to wear a mask will be fined 200 Australian dollars ($140).

“There’s no vaccine to this wildly infectious virus and it’s a simple thing, but it’s about changing habits, it’s about becoming a simple part of your routine,” Andrews said.