MANILA, Philippines — As mass actions in support of ABS-CBN mounted, pro-administration lawmakers dug their heels in over their rejection of the network’s application for a new franchise and called for more sanctions against the network, including a nearly P2-trillion fine and the seizure of its sprawling headquarters in Quezon City.

In the discussion, they talked about some of the issues raised against ABS-CBN, including the alleged irregularity in its block-time arrangement with a “dummy,” Amcara Broadcasting and its purported tax avoidance through a “tax shield,” Big Dipper Digital Content and Design Inc.

At one point, Marcoleta suggested forcing the network to pay P1.97 trillion in fines over the alleged violation of the terms of its old franchise, such as unauthorized digital broadcast using a frequency originally assigned to Amcara.

He said he arrived at the figure based on the number of set-top boxes “illegally” sold by the network multiplied by a P200-per-day fine over a period of more than five years.

Land title ‘made in Recto’

The representative of Sagip party list also proposed “ejecting” ABS-CBN from its headquarters in the 44,000-square-meter complex on Mother Ignacia Street, Quezon City, arguing it did not rightfully belong to the Lopez family.

Marcoleta recalled that during the 14-day House inquiry into ABS-CBN’s franchise application, network executives had presented a title for only a 42-sq-m lot, and not the complex housing their buildings and transmitters.

He said the network had failed to present the original title on the excuse that it was up for reconstitution.

“The conclusion here is it was made in Recto,” Marcoleta said, alluding to a Manila street notorious for forgeries and counterfeit documents.

Remulla also questioned ABS-CBN’s possession of the smaller Jusmag (Joint US Military Assistance Group) compound in front of the network’s complex. “That should belong to government,” he said.

The threats, reminiscent of the seizure of ABS-CBN’s properties in 1972 when then President Ferdinand Marcos declared martial law, could present new troubles for the beleaguered network as it struggles to keep afloat. 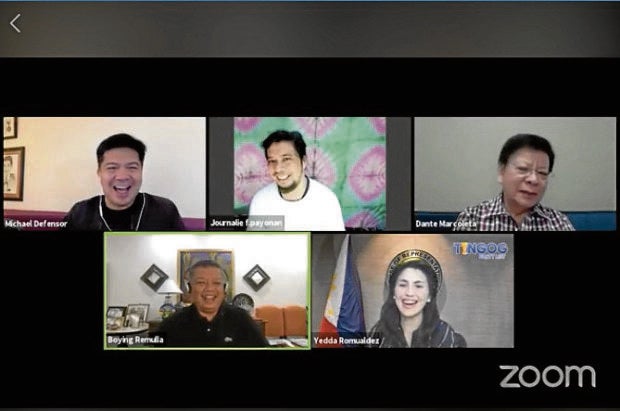 On July 10, the House legislative franchises committee denied ABS-CBN’s application for a fresh 25-year license in a 70-11 vote, putting an end to its hopes of resuming its broadcast operations and keeping its 11,000-strong workforce.

The Lopez-owned media conglomerate, whose news division had received President Rodrigo Duterte’s ire for its supposedly biased reporting among other slights, was forced to shut down its radio and TV businesses on May 5, a day after its franchise lapsed.

Its pay-per-view and other noncable digital broadcast services were also later terminated.

ABS-CBN’s shutdown and the House panel’s rejection of its franchise renewal have sparked “noise barrage” demonstrations in recent days with supporters calling for the network’s return to the airwaves.

But House leaders stood their ground.

“Is that how ABS-CBN looks at us? We’re not worthy of the truth. They really should have closed down. [That arrangement] is criminal in design. And I think that’s one of the things that convinced me that they really did not deserve a franchise,” he said.

Defensor said former ABS-CBN employees, who filed a lawsuit against the company, should be given the chance for a “workers’ takeover” of the company.
“Since they don’t own the transmitter and other facilities, then maybe they can do lease-to-own,” he said.

He proposed a follow-through meeting next week with the chairs of relevant House committees to make a decision on how to take further action against the company.

Defensor, in a statement on Sunday, remarked that the Lopezes “are fine and still in good shape” despite the denial of ABS-CBN’s franchise application. He proposed that the Lopezes transfer their shares in ABS-CBN to its own employees.

“Considering their great wealth, the Lopezes can easily opt to convey their common shares in ABS-CBN to its employees, who can then report a change of control and seek a new broadcasting franchise from Congress,” he said.

The hourlong discussion was not an official House proceeding but akin to an informal talk show. It was hosted by Defensor via Zoom with other lawmakers in the anti-ABS-CBN group and broadcast live on Defensor’s Facebook page.

Defensor said the online discussion was meant to better “explain” the recommendation of the franchise committee’s technical working group to reject ABS-CBN’s application, which was later upheld by the panel.

“I posted it everywhere but they (the public) didn’t understand,” he said.

When sought for comment, Kane Errol Choa, head of ABS-CBN’s corporate communications, said: “We don’t have a statement on those issues raised.”