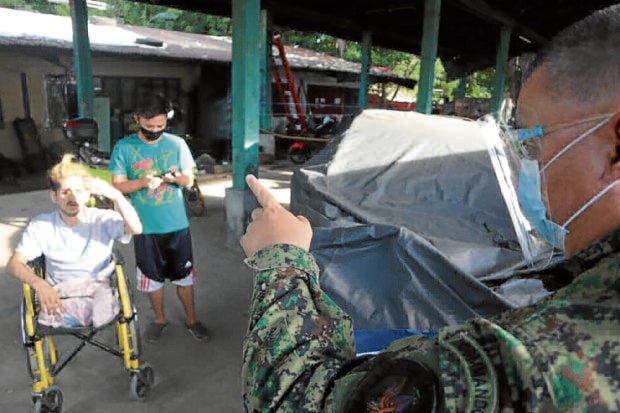 MANILA, Philippines — The family of a retired policeman will file criminal and administrative charges against a group of lawmen led by National Capital Region Police Office (NCRPO) chief Police Maj. Gen. Debold Sinas for allegedly harassing and trying to evict them from their house in Fort Bonifacio, Taguig City.

According to him, Sinas and more than a dozen armed policemen in camouflage uniforms arrived in front of their house inside the Southern Police District compound (SPD) in Fort Bonifacio past 4 p.m. on Saturday.

Sinas was looking for the parents of Delos Santos, who were not at home that time.

Delos Santos said he showed to Sinas documents to prove they were occupying the property legally but the NCRPO chief shouted at them to leave immediately.

When he noticed that the other police personnel were taking pictures of him and his family, Delos Santos tried to video the incident but a police officer snatched his phone. The same officer also tried to punch him, Delos Santos claimed, when he tried to take back the documents he had shown Sinas.

The incident was caught on the family’s closed-circuit television (CCTV) camera. Delos Santos posted clips of the videos on Facebook which quickly went viral as netizens criticized the police for using unnecessary force and intimidation.

Sinas later defended his actions in a statement, saying the area where the family lived was part of the NCRPO-Regional Direct Support Unit (RDSU) compound.

He identified the father of Delos Santos as Police Executive Master Sargeant Arnel delos Santos, who retired in November 2018 from the NCRPO-Regional Logistics Unit.

According to him, he went to the SPD headquarters to inspect the RDSU building, which was set to be rehabilitated to serve as a quarantine facility for policemen who might have contracted the coronavirus.

Sinas said the RDSU main building — along with the motorpool quarters and parking area being occupied by the Delos Santos family — were SPD property.

He added that the former policeman had refused to talk to him and other police officials about their continued occupancy of the motorpool quarters.

Read Next
Out-of-work father of 3 needs to undergo dialysis thrice weekly
EDITORS' PICK
Is your company a growth champion? Stand up and be recognized!
Joe Biden sworn in as 46th U.S. president, urges end to ‘uncivil war’
PUP accord with DND also faces termination
4 senators want military, cops off UP campuses
Acer Philippines welcomes you to its first flagship store
New Year, New Rediscoveries
MOST READ
A shade at Roque? Vice asserts being a comedian, not a clown
Makati Shangri-La to close its doors temporarily starting Feb. 1
Biden says Trump wrote him ‘very generous letter’
Trump’s parting gifts to Biden: Roaring stocks, a weaker dollar, tons of debt
Don't miss out on the latest news and information.