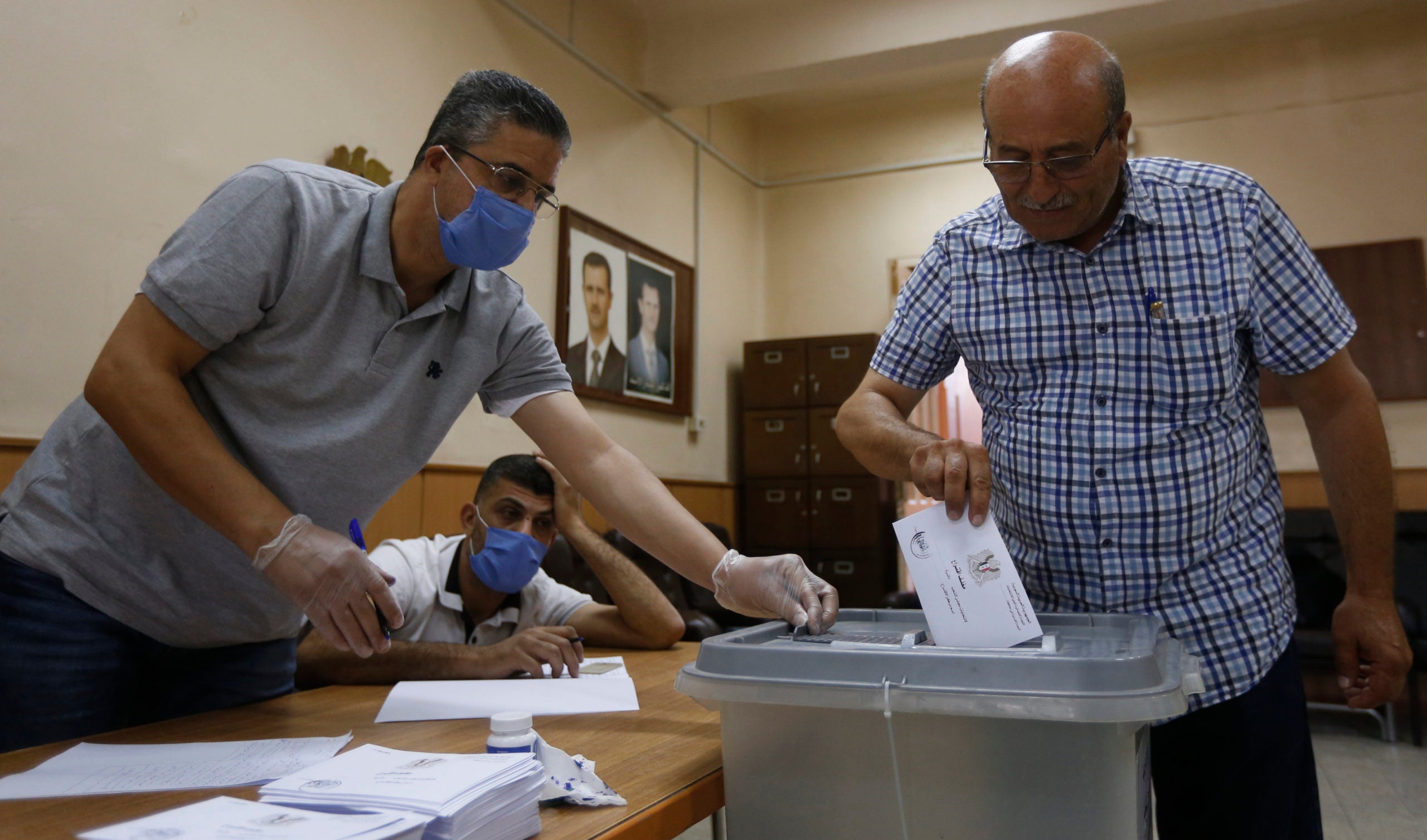 A man casts his ballot at a polling station in the Syrian capital Damascus on July 19, 2020, during the parliamentary elections. – Syrians vote today to elect a new parliament as the Damascus government grapples with international sanctions and a crumbling economy after retaking large parts of the war-torn country. (Photo by Louai Beshara / AFP)

DAMASCUS, Syria — Syrians voted Sunday to elect a new parliament as the Damascus government grapples with international sanctions and a crumbling economy after retaking large parts of the war-torn country.

More than 7,400 polling stations opened across government-held parts of Syria, including for the first time in former opposition strongholds, in the third such polls since the war started nine years ago.

Several lists were allowed to run across the country but without any real opposition, President Bashar al-Assad’s Baath party and its allies are expected to take most of parliament’s 250 seats.

The president and his wife Asma cast their votes in the capital, the presidency said, posting photos of the smartly dressed couple wearing white face masks to stem the spread of the novel coronavirus.

Volunteers stood outside polling stations carrying the programs and pictures of their favorite candidates and tried to woo passersby to come in and vote.

Among the first to cast his ballot in Damascus was 50-year-old Khaled al-Shaleh.

“My demands today are for the parliament to realize what laws need changing in the interest of the citizen,” said the government employee.

“The conditions in the country have changed for the worse as the war drags on. But our demands before, during, and after the war have always been to do with the economy,” he added.

Hanan Sukriye, 29, an employee at the finance ministry, said she was voting for the first time in her life.

“My vote alone won’t make a difference, but if we all come together to choose worthy candidates, there will be an impact,” she said.

On the eve of the polls, one person was killed and another wounded in a blast in Damascus, state news agency SANA said. The cause of the explosion was not immediately clear.

Portraits of the contenders have been displayed across the capital for weeks, with the 1,658 candidates including several prominent businessmen.

The elections, twice postponed from April due to the coronavirus pandemic, come at a time when most Syrians are worried about the soaring cost of living.

Many candidates are running on programs pledging to tackle inflation and improve infrastructure ravaged by the conflict.

“Lawmakers are going to have to make exceptional efforts to improve services,” said Umaya, a 31-year-old woman who works in a dentist’s practice.

Millions of Syrians living abroad, after fleeing a war that has killed more than 380,000 people, are not eligible to vote.

But for the first time, voting will take place in territory retaken by the government, including in the Eastern Ghouta region outside Damascus and in the south of Idlib province in the country’s northwest.

After a string of military victories backed by key ally Russia, the government is back in control of around 70 percent of the country, the Syrian Observatory for Human Rights war monitor says.

This year’s vote comes as Damascus struggles to redress an economy battered by nine years of war, Western sanctions, and the fallout of a financial crisis in neighboring Lebanon.

Food prices in Syria have shot up by more than 200 percent in the past year and now stand at 20 times their pre-war levels, the World Food Programme says.

In a country where more than 80 percent of people already live in poverty, the UN food agency has warned that Syrians are now facing an “unprecedented hunger crisis”.

The elections also come as Assad marked the second decade in power this month, and weeks after the United States imposed new sanctions on Syria including on the president’s wife.

The next presidential polls are expected in 2021, and candidates will need the written approval of at least 35 members of parliament.

Foreign Minister Walid al-Muallem last month said Assad would remain in power “as long as the Syrian want him to stay”.

Syria has officially recorded 496 cases of the novel coronavirus, including 25 deaths in government-held areas.