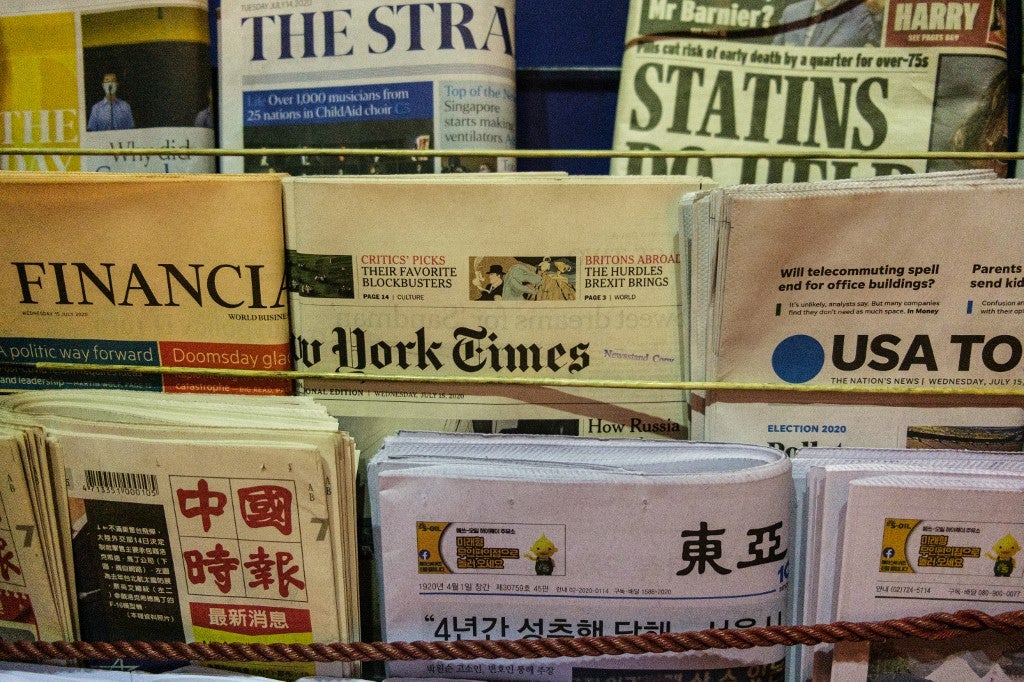 A copy of the New York Times (C) is displayed amongst other newspapers on a news stand in Hong Kong on July 15, 2020. – The New York Times said on July 15 it was moving its digital news hub from Hong Kong to South Korea as a result of a national security law China imposed on the city last month and trouble obtaining visas. (Photo by Anthony WALLACE / AFP)

HONG KONG, China — Hong Kong’s status as a bastion of press freedom is in crisis as authorities toughen their line against international media and fears grow about local self-censorship under the city’s sweeping new security law.

For decades the former British colony has been a shining light for journalists in Asia, lying on the fringes of an authoritarian China where the ruling Communist Party keeps a tight grip on public opinion.

The civil liberties that have stewarded the city’s success were promised to Hong Kongers for another 50 years under a deal that returned the trading hub to Chinese rule in 1997.

The New York Times, CNN, Bloomberg, the Wall Street Journal, CNBC, the Financial Times and AFP are among numerous international media outlets with a presence in the city, many basing their regional headquarters there.

Free from the harassment, censorship and restrictions pervasive on the authoritarian Chinese mainland, semi-autonomous Hong Kong has thrived as a safe haven for both local and foreign reporters.

But signs of the sands shifting have begun to emerge since China introduced its draconian new law earlier this month.

On Tuesday the New York Times announced it would relocate a third of its staff to Seoul, saying it faced unprecedented trouble obtaining visas.

The tabloid is owned by Jimmy Lai, a tycoon who Chinese state media has labelled a leading “black hand” colluding with foreign forces to destroy the mainland.

Beijing has made little secret of its desire to rein in Hong Kong’s media, both domestic and foreign.

One provision of the national security law orders authorities to “strengthen the management” of foreign news organisations.

“It seems like they are starting to at least consider using the visa as a means to punish the people they don’t like,” said Keith Richburg, director of the Journalism and Media Studies Centre at the University of Hong Kong and a former foreign correspondent for the Washington Post.

In 2018, Financial Times journalist Victor Mallet was refused a visa renewal weeks after he hosted a talk at the city’s foreign press club with an independence activist.

The legislation also grants the territory’s police and China’s intelligence apparatus sweeping surveillance powers, something Fast said could make it harder for journalists to protect their sources.

“It is basically open season on interception of communications and online surveillance,” she told AFP.

Much of the law is broadly worded and criminalises certain speech, such as a ban on instigating hatred towards the government or advocating independence.

Journalists fear they may inadvertently cross a red line by reporting what others say.

Hong Kong reporters have historically been a crucial conduit of information out of mainland China.

And the city’s press corps routinely barrages officials with the kind of critical questioning that would be unthinkable north of the border.

Her reply was that if reporters “guarantee that they will not commit any offences under this piece of national legislation”, then she could.

However, even before the security law, local media were under pressure, with advertising often drying up for the most Beijing-critical outlets.

“The problem of self-censorship, which has already been a concern, will get worse,” said Chris Yeung from the Hong Kong Journalists Association.

“It is likely that the mainland-style media control system and mechanism will be gradually introduced in Hong Kong.”

But London City University lecturer Chan said the press would not be easily tamed.

“Journalists in Hong Kong will do as much as they can for as long as they can,” she said.

Apple Daily boss Lai was asked in an online Q&A on Friday about the future of his reporting staff.

“It’s very difficult to protect them. All I can do is tell them to do things according to their conscience,” he said.

“I cannot ask them to be a martyr.”