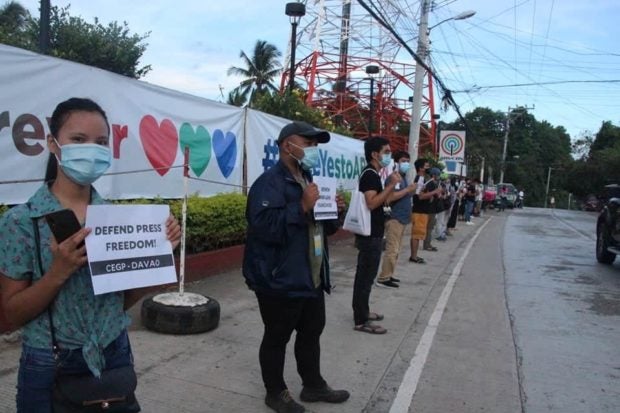 DAVAO CITY, Davao del Sur Philippines — At least 100 employees of ABS-CBN Southern Mindanao gathered in an emotional prayer and show of solidarity outside their building on Shrine Hills here on Saturday, thanking each other and remembering moments working for the country’s biggest TV network rendered closed under the Duterte administration.

“It’s only the signal (that they managed to shutdown) but not the spirit,” the voice in the microphone floated as the employees, most of them wearing white, took their places on the chairs arranged meters apart  in front of a banner which read, “Vote Yes to ABS CBN.”

As employees took turns remembering the days they spent in the company, their daily struggle and how they ended up now, journalists gathered outside the TV network’s gate, chanting “Defend Press Freedom.”

Kath Cortes, member of the national directorate of the National Union of Journalists of the Philippines (NUJP), said the 6 p.m. noise barrage was part of the nationwide protest actions to call attention not only to the 11,000 media workers who would be left jobless but also the government’s “trampling of press freedom and the citizen’s right to free expression” with the network’s signing off air.

The House Committee on Legislative Franchises rejected the TV network’s franchise renewal for another 25 years, forcing the network to shut down.