India, the United States, Brazil and South Africa are currently experiencing the highest spikes in COVID-19 cases seen since the start of the month.

And the four economic powerhouses are still well off reaching their pandemic peak, experts say. 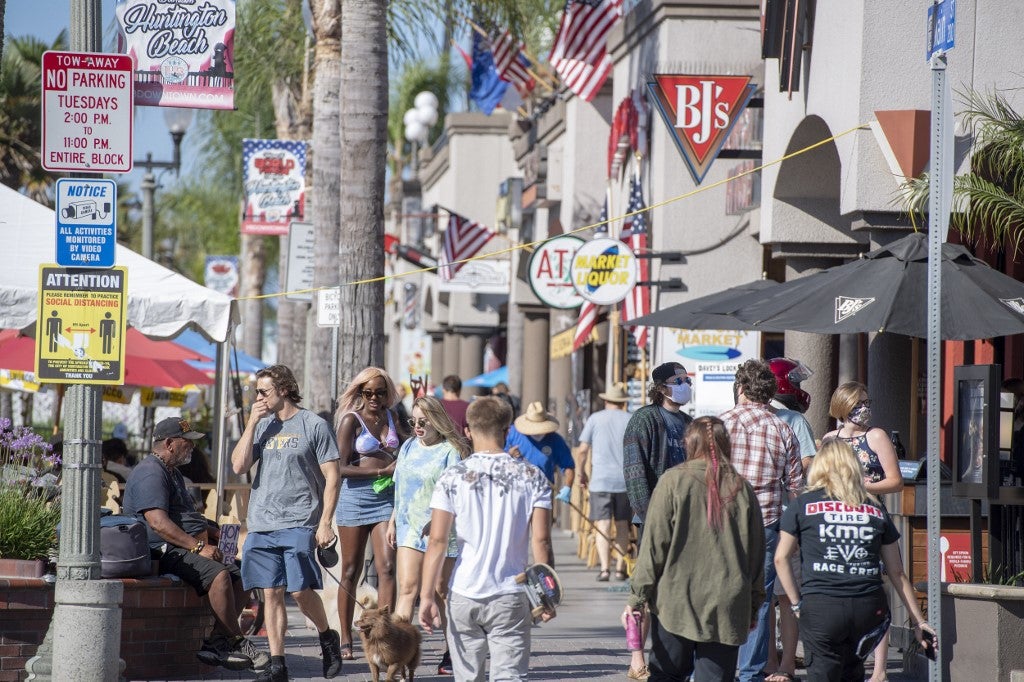 The United States, with 328 million inhabitants, leads the way in the COVID-19 case count, registering more than 50,000 a day since the start of July and more than 140,000 deaths to date — equivalent to 413 per million population, according to AFP estimates based on official data.

More than 3.5 million US cases have been reported overall and 40 of the 50 states are currently logging rising tolls.

California, the most populous state and the first to implement a lockdown in March, decided Tuesday on a second shutdown to cover bars, indoor restaurants, cinemas, museums and zoos.

Mid-April saw a first peak in cases followed by a levelling-off which then gave way to a new acceleration by mid-June, suggesting the US remains in its first coronavirus wave.

After initially appearing in the northwest and northeast including former epicenter New York, the virus spread to the south, the Midwest and west. Worst-hit states are Texas, Florida, Arizona and California.

As with India, experts say the US response is hampered by its federal governance system whereby state authorities react with a confused patchwork of responses.

President Donald Trump has politicized the science, particularly regarding the wearing of masks, initially suggesting they were a liberal ploy to stoke fear and undermine him.

Although he and his administration have belatedly shifted their stance, states not hit hard initially eased restrictions too quickly, moving to reopen bars and indoor dining, reigniting the spread.

The rate of positive tests remains well above the five percent recommended by WHO guidelines in the worst affected states, suggesting the virus is still out of control.

Administration officials estimate total infections by the end of the year could be 40 million. 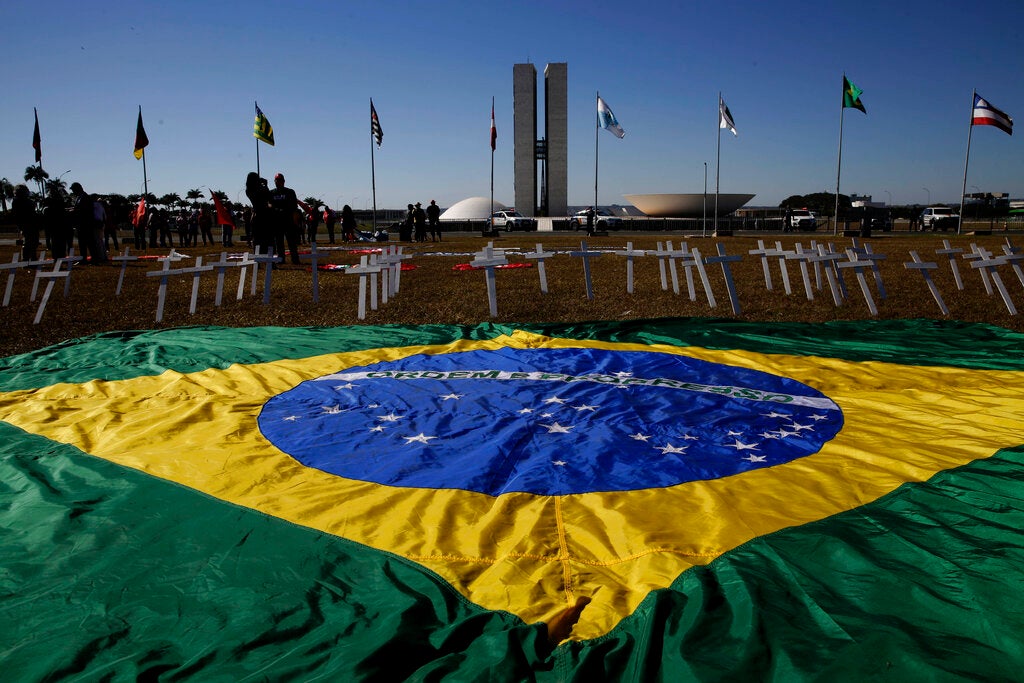 A large Brazilian flag is spread out before rows of crosses representing the thousands of deaths due to the new coronavirus during a protest demanding President Jair Bolsonaro be impeached, in front of the National Congress in Brasilia, Brazil, Tuesday, July 14, 2020. (AP Photo/Eraldo Peres)

Latin America’s largest economy with a population of 209 million led by populist President Jair Bolsonaro has around two million cases or 254 per million and a death toll of 70,000.

Specialists say the true case load could be understated by as much as a factor of ten and fatalities as much as twofold.

In the Amazonian north indigenous peoples with relatively low immunity are in the firing line as the disease spreads.

But it is Sao Paulo and Rio de Janeiro in the southeast which are leading the way with the bulk of cases — Rio’s mortality rate is particularly high at 665 per million inhabitants.

The spread is turning southwards, however.

“I can’t visualize a real leveling off” of the case curve, Domingos Alves, health research coordinator at the Ribeirao Preto faculty of medicine told AFP on July 10.

“The number of contaminations will continue to rise until October-November, with fluctuations,” he said.

Having derided the illness as a “little flu” before catching it himself, Bolsonaro has fought state governors’ attempts to impose lockdowns. 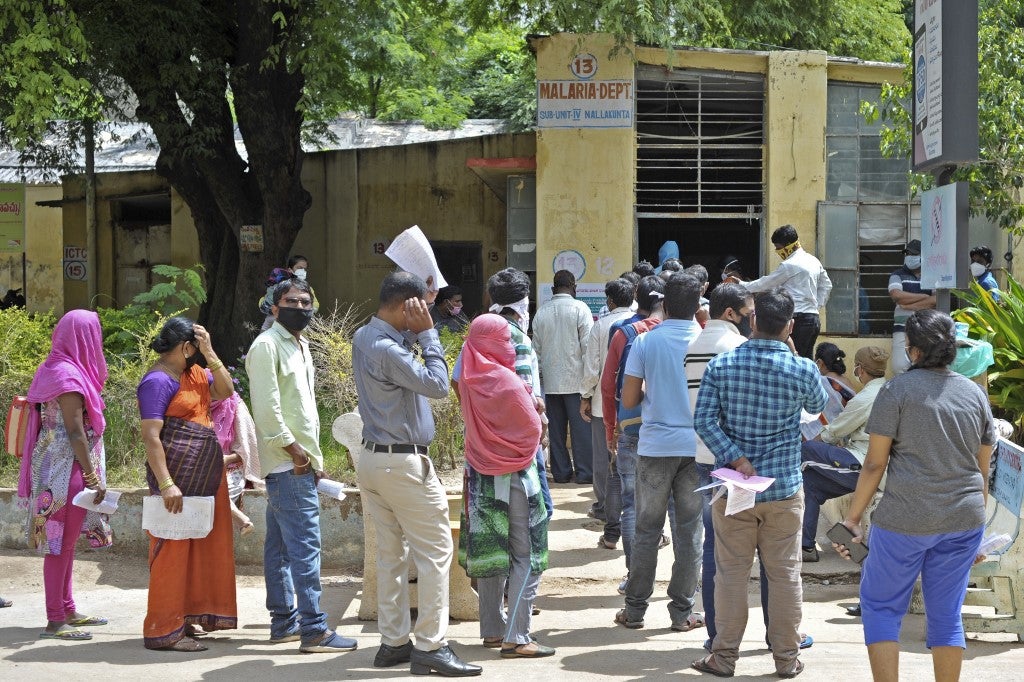 People stand in queues to get their names registered for the COVID-19 coronavirus test at a government free testing center in Hyderabad on July 17, 2020.. (Photo by NOAH SEELAM / AFP)

The world’s fifth economy with 1.3 billion inhabitants is set to crash through the one million case barrier.

Narendra Modi’s government on Tuesday decided to reconfine around a tenth of the population with a new lockdown for 125 million people in northeastern Bihar state until July 31 as well as for 13 million people in the IT hub of Bangalore.

Although its fatality rate is low — at 17 per million inhabitants, compared with 663 in the United Kingdom — India is one of the four countries where the caseload is rising the quickest.

The most affected state is Maharashtra in western India — home to Bollywood — with 260,924 cases by mid-July, followed by the southern state of Tamil Nadu with 142,798 cases. Maharashtra, Tamil Nadu and the capital New Delhi (113,740 cases) account for nearly 90 percent of cases.

Samit Bhattacharyya, an associate professor at the private Shiv Nadar University, says India’s contagion has not yet reached its peak.

“From my observation, not yet, not even in a few days. There may be many reasons behind this — low testing, dubious data, and asymptomatic infections.”

He adds: “It seems the epicenter of the infection is changing from one state to another in India. Important reasons are unplanned implementation of lockdown.

“Peak is yet to come. I expect it by mid-August. Other predict for October, November or December,” says T. Jacob John, a leading Indian virologist.

He said “health is not and never has been” a political or even a popular priority.

“Culturally Indians accept all tragedies and death without complaints. Lockdowns had severe economic repercussions and that too will be stoically accepted.” 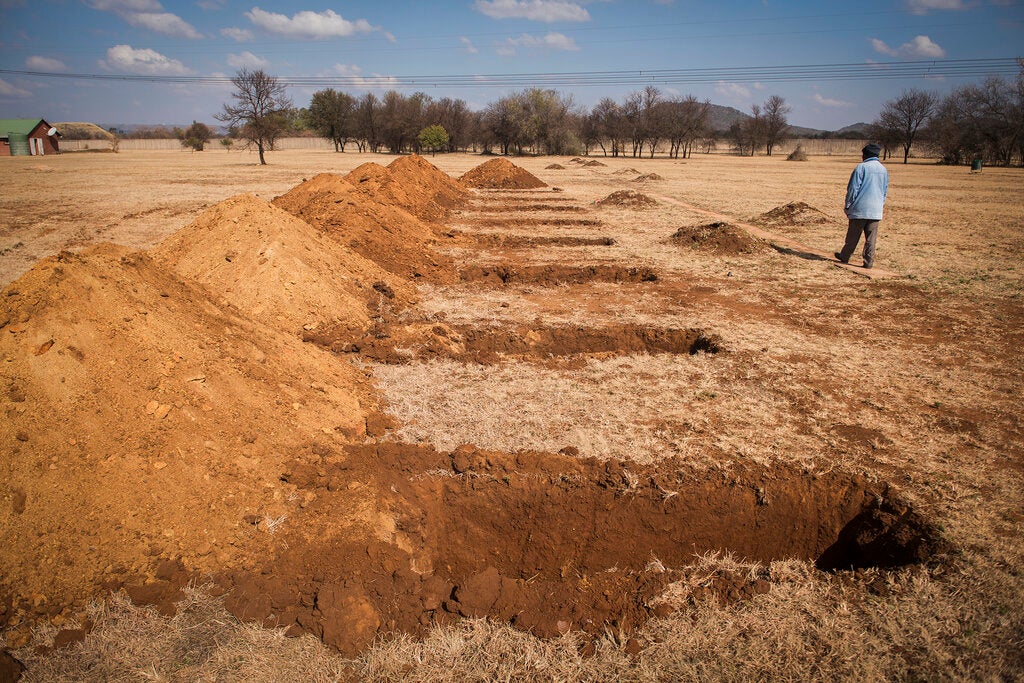 Africa’s number one economy, population 58 million, has been seeing exponential growth with some 8,000 COVID-19 cases per day — 500 per hour — since the start of July, taking the total caseload past 300,000.

President Cyril Ramaphosa said Sunday that “the force and the speed with which it has progressed has, quite understandably, caused great concern”.

The most affected province is Gauteng — home to business hub Johannesburg and the capital Pretoria with 107,070 infections to July 14th, accounting for 35.9 percent of national cases.

Next worst affected is Western Cape province, a favorite destination for tourists, which has 80,199 cases or 26.9 percent of cases.

The southern KwaZulu-Natal province, where South Africa’s patient zero was detected, having arrived from Italy on March 5, is next with 30,587 cases or 10 percent.

“We are seeing very fast increases in the number of cases in Johannesburg. We anticipate this will continue for several more weeks before we reach the peak,” South Africa’s leading epidemiologist and the government’s top coronavirus advisor Salim Abdool Karim told AFP.

“Johannesburg is in many ways like New York, it’s very dense, highly populated, social distancing is a challenge,” he said.

The initial lockdown had a marked impact on the spread of the virus, but Karim said that was never going to be economically sustainable.

“But we needed to be sure we were better prepared when the restrictions were being eased,” said Karim, adding testing rates were being hampered by lack of adequate test kits.