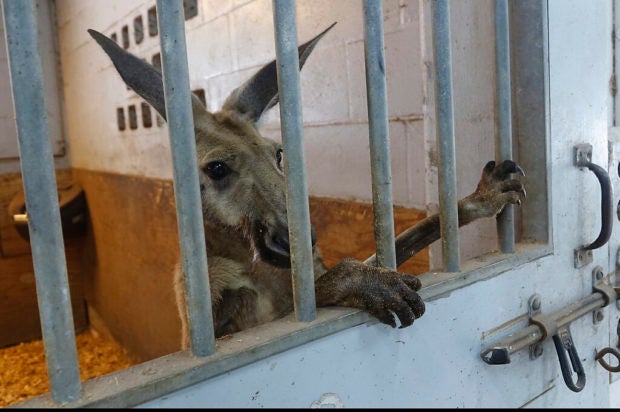 A kangaroo captured by Fort Lauderdale Police peers out from a stall at the Mounted Police headquarters in Fort Lauderdale, Fla. Thursday, July 16, 2020. (South Florida Sun-Sentinel via AP)

After receiving a call about a kangaroo running loose, Fort Lauderdale police officers managed to capture him and place him in a squad car. The marsupial was taken to a barn where the agency keeps its horses.

Anthony Macias, who claims to be the kangaroo’s owner, told the Sun Sentinel he had been hoping to bring his pet, Jack, home, but police told him the animal won’t be returned, because Fort Lauderdale isn’t zoned for kangaroos.

Macias said he was at work when he learned Jack had escaped.

“I was taking out the recycle bin, and I didn’t shut the gate all the way,” Macias said. “I guess he just punched his way through.”

Jack was first spotted about a block from Macias’s home around 9:30 a.m., officials said. Officers followed him for three blocks before grabbing him.

Macias said he got Jack about four months ago from a Davie man who was moving and did not want the animal anymore. Macias also has a Corgi named Max.

“They love each other,” he said. “They play and run around.”

Officials weren’t sure where Jack would end up, but Macias said he has friends in Palm Beach County who are permitted to house kangaroos.