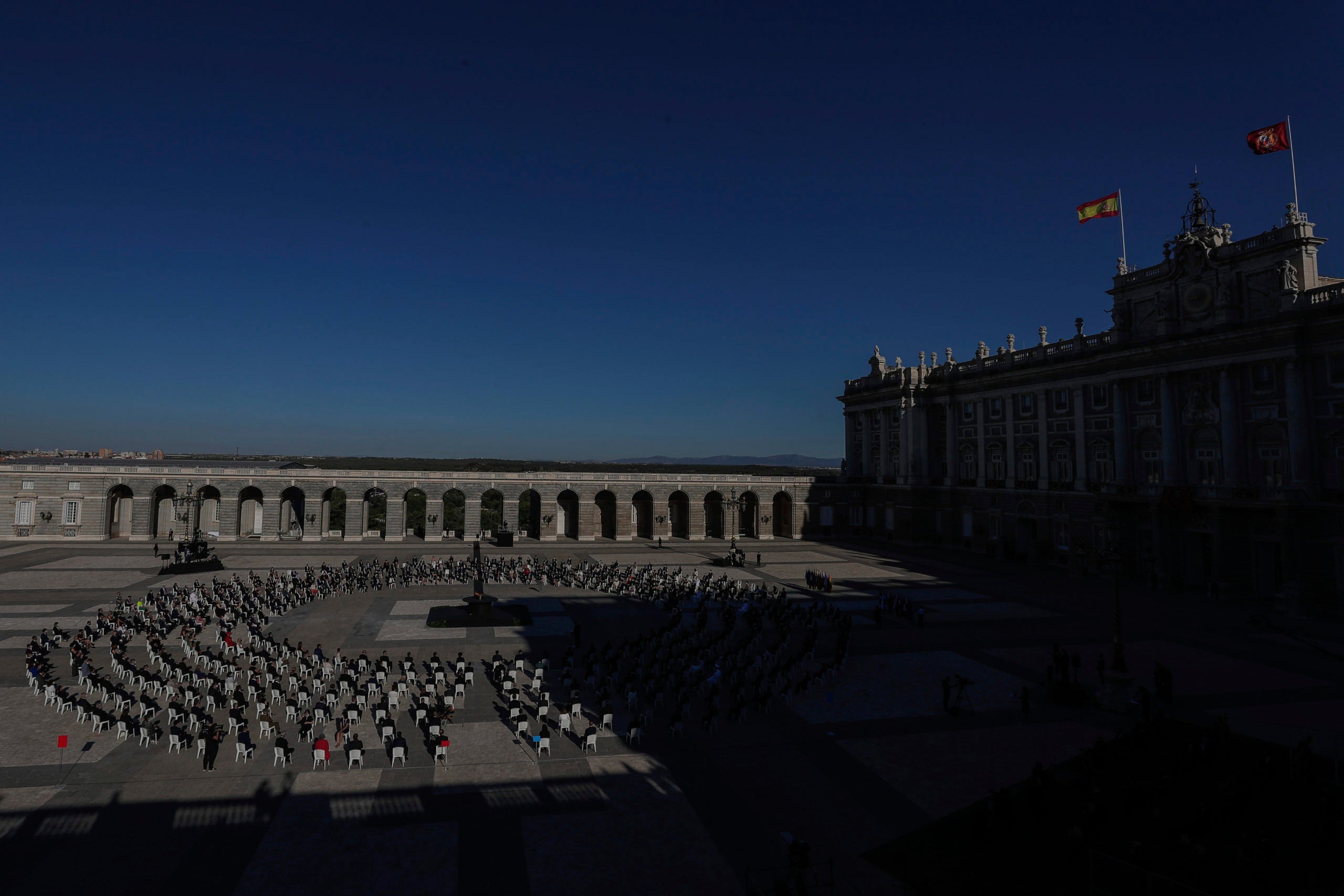 Authorities and civil society members attend a state tribute in memory of COVID-19 victims at an esplanade in Madrid’s Royal Palace in Madrid, Spain, Thursday, July 16, 2020. Spain is paying homage to the nation’s victims of the new coronavirus and workers who put their lives at the crossroads during the worst of the pandemic with a solemn ceremony in Madrid. (AP Photo/Manu Fernandez)

MADRID — Spain paid tribute Thursday to the nation’s victims of the new coronavirus and workers who put their lives at risk during the worst of the pandemic with a solemn state ceremony in Madrid.

Relatives of around 100 people who died during the pandemic, representatives of medical personnel, police, and other essential workers joined King Felipe VI and Queen Letizia, government members, and officials from the European Union and the World Health Organization at an esplanade in Madrid’s Royal Palace.

The guests, masked and seated in a socially distanced fashion surrounding a central cauldron, included representatives from a dozen religious organizations and ambassadors. The ceremony was shown live on television and online.

In an emotional speech, Hernando Calleja said he was sharing the pain of the loss of his brother José María, a well-known journalist and writer in Madrid, with other relatives of “anonymous” victims.

“Let’s not forget that the coronavirus was and continues to be a cold, cruel, and wrecking executioner,” Calleja said.

Aroa López, a nurse from the Vall d’Hebron hospital in Barcelona, spoke representing workers in hospitals, health centers, and laboratories, at least 52,600 of whom have been diagnosed as infected with the virus. She also remembered truck drivers, cleaners, and thousands of others who “took care of the millions of Spaniards who were confined.”

After telling how some health workers made video calls between relatives and dying patients or held the hands of those who didn’t want to die alone, she urged politicians to protect the public health system.

“Who will take care of us if the person who takes care of us cannot do it?” she implored. “Let us never forget the lesson learned.”

As a live performance of string music took over from the words, attendees left white roses by the cauldron.

The country’s monarch praised the citizens’ response to the outbreak and called for responsible behavior in fighting the virus.

“We have a moral obligation to always recognize and respect the dignity of the deceased and a civic duty to promote the best values that underlie our society,” Felipe VI said before the ceremony came to an end with a minute of silence.

All Spanish political parties attended the state tribute except for the far-right Vox, whose leader has called the event an “act of propaganda” and “an exculpatory ceremony” for the left-wing ruling coalition led by Prime Minister Pedro Sánchez.

Spain has officially recorded 28,413 victims who died after testing positive for the COVID-19 disease, although excess mortality figures suggest the actual figure is thousands higher. The country is grappling with dozens of fresh outbreaks after it emerged from a strict lockdown last month.