DALLAS  — American Airlines is notifying about 25,000 workers that their jobs could be eliminated in October because of plunging demand for air travel, adding to the toll that the virus pandemic is taking on the airline industry. 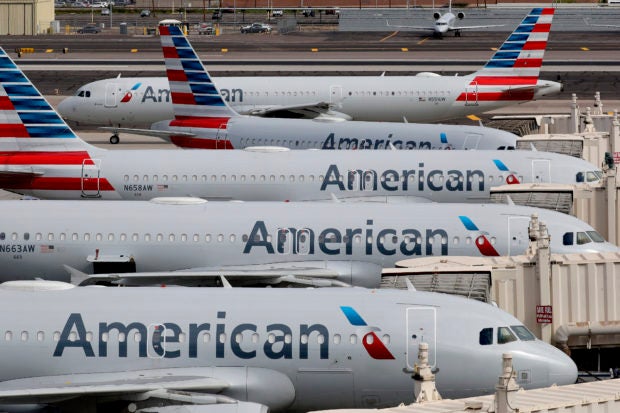 FILE – In this March 25, 2020, file photo, American Airlines jets sit idly at their gates as a jet arrives at Sky Harbor International Airport in Phoenix. American Airlines is telling 25,000 workers that they could lose their jobs in October because of the sharp drop in air travel during the virus pandemic. The airline said Wednesday, July 15, it was starting new offers of buyouts and partially paid leave, which it hopes will reduce the number of furloughs. (AP Photo/Matt York, File)

American’s top executives said Wednesday that the number of furloughs could be lower if enough workers take buyouts or accept partially paid leave for up to two years.

The airline’s two top officials said they thought American might avoid furloughs because they believed demand for air travel would “steadily rebound” by Oct. 1 as the virus outbreak weakened.

“That unfortunately has not been the case,” CEO Doug Parker and President Robert Isom said in a memo to employees. “And with infection rates increasing and several states reestablishing quarantine restrictions, demand for air travel is slowing again.”

Air travel plunged 95% from early March to mid-April, then grew slowly until leveling off in July as virus cases surged in the South and Southwest.

U.S. airlines accepted up to $25 billion in federal aid to help cover payroll costs in exchange for not cutting jobs until October.

Last week, United told 36,000 employees that they could lose their jobs in October. Delta has sent notices to more than 2,000 pilots.

American’s cuts would fall most heavily on flight attendants, with nearly 10,000, or 37%, getting notices of potential furloughs — the industry’s preferred term for layoffs of workers who have rehiring rights. About 4,500 ground workers, 3,200 mechanics and 2,500 pilots will get notices.

“It’s brutal,” said Dennis Tajer, a pilot and spokesman for the union of American’s pilots. “This puts the number on how serious the virus is for airlines and our economy.”

Several airline unions are lobbying for another $25 billion in federal payroll aid through March. American’s pilots want the government to buy billions of dollars worth of seats per month — creating more space between passengers — until the pandemic ends.

Separately, Delta Air Lines said Wednesday that it expects to take a charge of $2.7 billion to $3.3 billion to cover the cost of early retirements and buyouts for employees as it shrinks in response to a sharp decline in air travel.

The airline said this week that 17,000 employees have agreed to depart.

Delta said in a regulatory filing that $500 million to $600 million of the charge would go toward cash payments to pilots, flight attendants, ground workers and other departing employees in the July-September quarter.

Employees who agree to leave get payments, health insurance and, in some cases, retiree health care benefits.

Delta CEO Ed Bastian said the airline hopes to carry out the “vast majority of the head count changes we need” through voluntary departures, “minimizing, if not eliminating, the need for involuntary furloughs.”