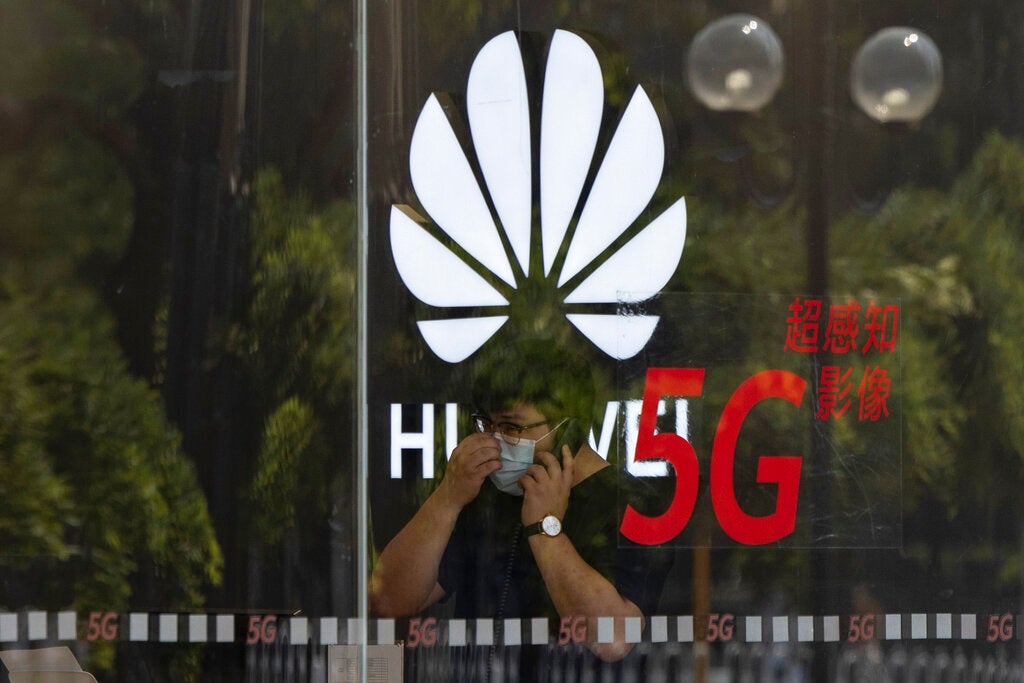 A worker wearing a mask to curb the spread of the coronavirus speaks on the phone near the Huawei logo in a store in Beijing on Wednesday, July 15, 2020. China’s government accused Britain on Wednesday of colluding with Washington to hurt Chinese companies after tech giant Huawei was blocked from working on a next-generation mobile phone network. (AP Photo/Ng Han Guan)

BEIJING — China accused Britain on Wednesday of colluding with Washington to hurt Huawei after the Chinese tech giant was blocked from working on a British next-generation mobile phone network.

A government spokeswoman said Beijing will protect Chinese companies but gave no indication of possible retaliation.

Washington accuses Huawei Technologies Ltd., the biggest maker of switching gear for phone and internet companies, of being a security risk, which the Chinese company denies. The Trump administration wants European and other allies to exclude Huawei as they upgrade to fifth-generation, or 5G, networks.

On Tuesday, the British government announced Huawei would be excluded from work on the network because U.S. sanctions made it impossible to ensure the security of Chinese-supplied equipment.

“Without any concrete evidence, the United Kingdom took unfounded risks as an excuse and cooperated with the United States to discriminate, suppress and exclude Chinese companies,” foreign ministry spokeswoman Hua Chunying said.

Last year, Washington imposed curbs on Huawei’s access to American components and other technology. In May, the Trump administration tightened controls by blocking non-U.S. companies from using American technology to produce processor chips and other components for Huawei without Washington’s approval.

“China will fully and seriously evaluate this incident and take all measures to safeguard the legitimate rights and interests of Chinese enterprises,” Hua said.

On Tuesday, President Donald Trump said Washington told other governments to avoid Huawei “if they want to do business with us.”

Huawei is at the center of U.S.-Chinese conflicts over technology development and possible spying. The company’s chief financial officer is under house arrest in Canada and fighting extradition to the United States to face charges related to possible violations of trade sanctions on Iran.

On Tuesday, Huawei reported its revenue grew 13.1% in the first half of 2020 compared with a year earlier despite U.S. pressure and the coronavirus pandemic.

Huawei is, along with Nokia Corp. of Finland and Sweden’s LM Ericsson, a leader in development of fifth-generation technology.

5G is meant to expand networks to support self-driving cars, remote surgery and other futuristic applications. That makes the technology more intrusive and sensitive politically.

U.S. officials have suggested Washington might provide financing so that other countries can buy Nokia or Ericsson technology instead of Huawei’s lower-priced gear.

British Prime Minister Boris Johnson’s government agreed in January to allow Huawei to supply some equipment for the 5G network while it would be barred from providing core components.

London reversed course after the Trump administration threatened to end an intelligence-sharing agreement due to concern that Huawei’s involvement might allow Beijing to infiltrate British networks.