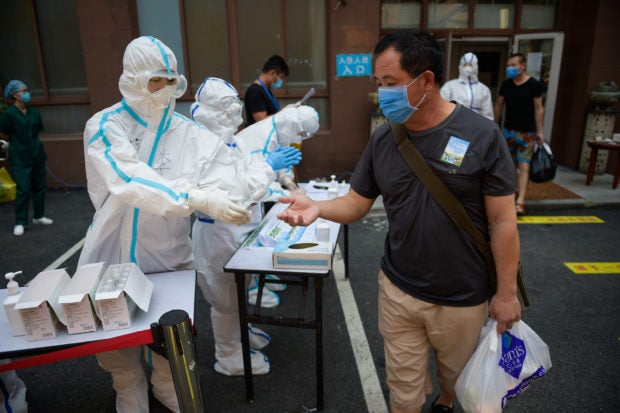 A medical worker at a quarantine site for personnel related to the Xinfadi market offers a man hand sanitizer in Beijing, on July 7, 2020. Xinhua via China Daily/Asia News Network

BEIJING — The novel coronavirus raging worldwide may strike harder this winter, dampening the outlook for a return to a normal life and underscoring the need to gear up for a protracted war against the disease, experts have said.

Despite the increased risk, the epidemic situation that played out in Hubei province earlier this year will not be repeated in China, as the country has proved that regional outbreaks can be suppressed with swift and targeted control measures－a response that the rest of the world could refer to, they added.

The pandemic is worsening globally with a record single-day high of 230,370 new cases reported on Sunday, according to the World Health Organization.

Wu Zunyou, chief epidemiologist at the Chinese Center for Disease Control and Prevention, said the virus has been spreading quickly worldwide since March, and recent new infections added in the United States, Brazil, India and South Africa accounted for more than half of total new caseloads.

“Initial analysis shows that the viral pandemic will maintain a high level of prevalence in the near future and worsen during the coming winter,” he said during an online forum held by Caixin Magazine on Sunday evening.

China is under the dual pressure of coping with sudden outbreaks stemming from unidentified sources, such as the recent one tied to a major wholesale market in Beijing,as well as infection clusters seeded by imported cases, as seen in several cities in northeastern provinces in the past few months, Wu said.

The outbreak in Beijing, detected on June 11, has been brought under full control with no new cases for eight days as of Monday. On Monday, only three new imported cases were added nationwide and the number of patients in treatment had fallen to 297, data from the National Health Commission show.

Wu said the rapid suppression of the virus in the capital has boosted China’s confidence in averting another wave of infections as severe as the outbreak in Hubei’s capital Wuhan- the hardest-hit city in the country－despite mounting pressure brought by more international flights.

“Beijing’s actions serve as an example for the rest of China and could be a reference for the world.The key is prompt detection, a resolute rollout of refined containment measures and wide testing,” he said.

Chen Zhengming, an epidemiology professor at the University of Oxford, also warned that the virus is unlikely to disappear and the world is entrenched in a long battle against the disease.

“The number of infections worldwide has reached 12.6 million, which is severely underestimated due to limited testing in some regions and the existence of asymptomatic carriers that go undetected,” he said.

“We have paid a high price for changing our lifestyles and implementing lockdowns, but some countries are bound to see or have seen a resurgence of the virus after relaxing control measures and opening up, such as Japan, the United Kingdom and Israel,” he said, adding that “this autumn and winter will be a crucial test”.

“China has shown us that the disease is controllable,” he said.

“How to prevent sporadic cases from spiraling out of control? Other countries can obtain valuable lessons in this aspect from Beijing,” Chen said.

However, even in China, referred to as “a top student” during the forum for its response to the pandemic, a full return to life amid the pandemic is almost impossible and dealing with sporadic new infections will be common, experts said.

On Monday, WHO Director-General Tedros Adhanom Ghebreyesus told a news conference that “there will be no return to the old normal for the foreseeable future” as the virus is still running rampant in most countries and remains “public enemy No 1”.

Zeng Guang, chief epidemiologist at the Chinese CDC, added that the new normal requires authorities to fine-tune disease control policies to minimize impact on the resumption of work.

“For instance, during the recent outbreak, Beijing has decided to classify epidemic risk levels by neighborhood unit to narrow down the affected areas. More efforts are needed to explore such refined strategies under the new normal,” he said.

Xue Lan, dean of Tsinghua University’s Schwarzman College, said people coexist with many contagious diseases, and the risk of the novel coronavirus can be maintained at an acceptable level but not completely wiped out.

“For China, it is time to shift mindsets to comprehensively review risks, including effects on the economic and social development sector,” he said.