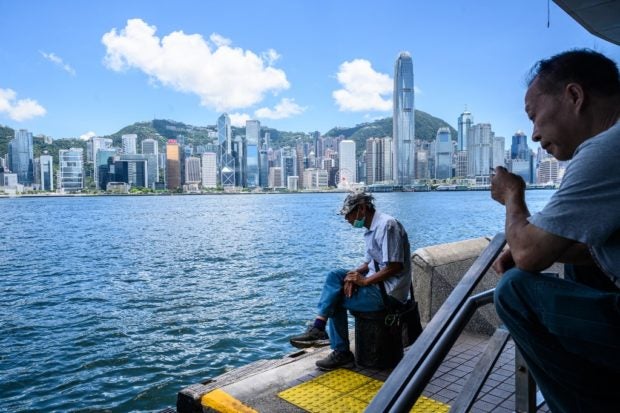 A man wearing a face mask sits along the Kowloon side of Victoria Harbour which faces the skyline of Hong Kong Island, in Hong Kong on July 13, 2020. Photo by Anthony WALLACE / AFP

HONG KONG — The New York Times on Wednesday said it was moving its digital news hub from Hong Kong to South Korea as a result of a national security law Beijing imposed on the city last month and trouble obtaining visas.

It is the first major relocation by an international news organization since authoritarian China enacted its sweeping security law late last month, ramping up its control over the semi-autonomous city.

In an email to staff, Times executives said the new law “has created a lot of uncertainty about what the new rules will mean to our operation and our journalism.”

“We feel it is prudent to make contingency plans and begin to diversify our editing staff around the region.”

The newspaper has had a regional headquarters in Hong Kong for decades, overseeing Asia coverage and more recently helping to run the newspaper’s 24-hour digital news operation alongside its two others hubs in London and New York.

In its own news report on the move, the Times said it would move its digital team — roughly one-third of its Hong Kong employees — to Seoul over the next year.

The Times report said it had recently “faced challenges securing work permits” for its staff in Hong Kong, something it said was “commonplace in China but were rarely an issue in the former colony.”

Earlier this year China expelled several journalists working for US news organizations — including the Times — in a tit-for-tat spat with Washington.

Some of the expelled Times journalists have already relocated to Seoul.

Hong Kong has been a major regional hub for international media for decades thanks to its easy business environment and key civil liberties that Beijing pledged to protect until 2047 under the handover deal with Britain.

Alongside the New York Times, media organizations that have major regional hubs in Hong Kong include AFP, CNN, the Wall Street Journal, Bloomberg and the Financial Times.

But Beijing’s new security law has sent a chill through the city because its broad wording criminalizes some political speech and ramps up Communist Party control.

One provision calls upon authorities to “strengthen the management” of foreign news organizations.

Hong Kong’s local government — which answers to Beijing — has shown little appetite to defend the media and the city has slid down press freedom rankings in recent years.

Authorities are currently conducting a review of independent but state-funded broadcaster RTHK following criticism it was overly sympathetic to pro-democracy protests that shook the city last year, an allegation the network denies.

Visas for foreign journalists have started to become subject to political pressure.

In 2018, Financial Times journalist Victor Mallet was effectively expelled after he hosted a talk at the Foreign Correspondents’ Club of Hong Kong (FCCHK) with a local independence advocate.

When China kicked out the American journalists earlier this year it also announced they would not be allowed into Hong Kong, even though the city is supposedly in charge of its own immigration policies. At least one of the journalists was a permanent Hong Kong resident.

Earlier this month, the FCCHK wrote a letter to city leader Carrie Lam seeking urgent clarification of how Beijing’s security law will impact journalists in the city.

At a press conference last week, Lam was asked by a reporter whether she could “100 percent guarantee” media freedoms.

Lam replied: “If the Foreign Correspondents’ Club or reporters in Hong Kong can give me a 100 percent guarantee that they will not commit any offenses under this piece of national legislation, then I can do this.”