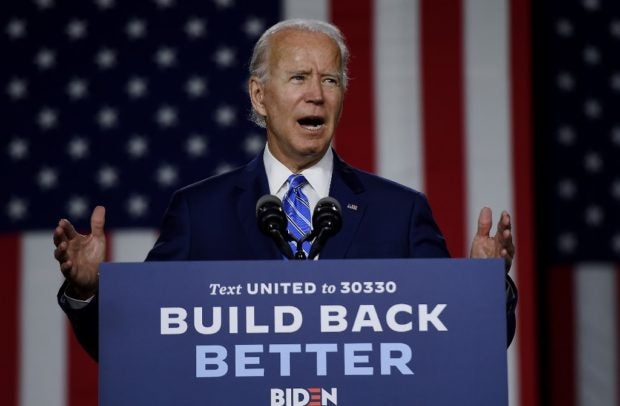 The clean energy proposal was fleshed out in a speech in Wilmington as the veteran Democrat drew a sharp contrast with President Donald Trump ahead of November’s election by arguing that fighting climate change would be a massive job creator under a Biden administration.

Insisting that “there’s no more consequential challenge” today than climate change, Biden pledged to spend $2 trillion over four years to promote his plan, a dramatic acceleration of the $1.7 trillion he had proposed to spend over 10 years during the primary race.

“Transforming the American electrical sector to produce power without producing carbon pollution… will be the greatest spurring of job creation and economic competitiveness in the 21st century,” Biden said.

“That’s why we’re going to achieve a carbon pollution-free electric sector by the year 2035.”

The plan also includes more ambitious goals than the proposal he released months ago when he ran as one of the more moderate Democrats in the party’s nomination race.

By embracing some ideas of his progressive ex-rivals, including Senator Bernie Sanders and Washington Governor Jay Inslee, Biden appears intent on winning over progressive voters who might be wary of the former vice president’s more centrist positions.

He reiterated that he would rejoin the Paris climate agreement that Trump quit in 2017, fund the construction of 1.5 million new energy efficient homes, upgrade appliance standards and prioritize renewable energy.

“We’re not just going to tinker around the edges,” Biden said.

“I know meeting the challenge will be a once-in-a-lifetime opportunity to jolt new life into our economy.”

Biden said he would reverse some 100 steps by Trump to roll back environmental regulations.

He also recalled parts of his earlier climate proposal that would put the nation on the road to net zero emissions economy-wide no later than 2050.

Trump delivered a rebuttal hours later, accusing Biden of launching a “hard-left crusade against American energy” and pushing a platform “that would demolish the US economy.”

“He wants no oil and gas,” Trump said as he criticized Biden’s plan to reduce carbon emissions.

One week earlier Biden unveiled a unity platform that incorporated positions from leftist Sanders, but Trump attacked it as “the most extreme platform of any major party nominee, by far, in American history.”

Biden, who has refrained from campaigning publicly amid coronavirus outbreaks, berated Trump for failing to contain a pandemic which has killed 136,000 Americans, or set the right example by wearing a mask, something Trump finally did on Saturday.

“I’m glad he made the shift,” Biden said of Trump appearing in a mask.

“But Mr President, it’s not enough. We won’t be able to turn the corner and get the American people back to work safely without presidential leadership.”

Biden leads Trump on most issues, according to polling, but voters still see the president as stronger on steering the US economy.