In Baguio, ‘pony boys’ raring to get horses back on track 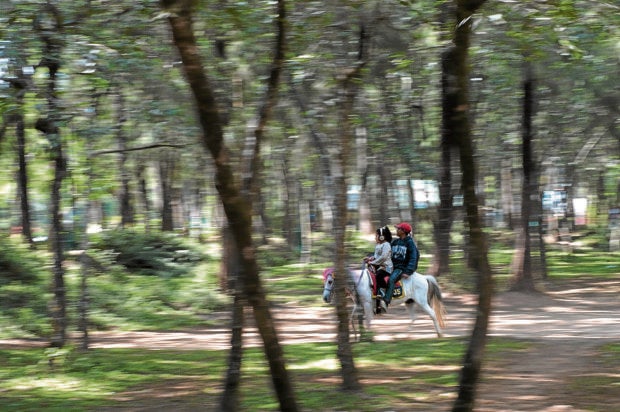 PARK RIDE The wooded Wright Park, popular for horseback riding, is among the busiest tourist spots in Baguio City before the government imposed a lockdown in Luzon in March to contain the spread of COVID-19. The suspension of tourism activities in the last four months has left the park’s “pony boys” struggling to make ends meet. —RICHARD BALONGLONG

BAGUIO CITY—When this city closed its borders during the Luzon lockdown, about 150 “pony boys,” or horse trainers and handlers, at Wright Park were among those who instantly lost their main source of livelihood.

Known for horseback riding rentals, the wooded Wright Park is among the city’s popular tourist spots, but its closure in the last four months has left the pony boys struggling to make ends meet.The situation got worse when more than 10 horses died from sickness and poor nutrition, according to Jimmy Lim, a horse trainer for 38 years.

Many horses were barely ridden for three months, which caused their health to deteriorate.“The horses need to be ridden daily for two hours to maintain a good level of health,” Lim said. “They’re now too weak from undernourishment and lack of exercise.”No income

He and the other horse trainers also had to spend P2,000 for the horses’ treatment, which, he said, was “even more burdensome.” They used to earn more than P1,000 a day by charging P250 each rider for a half hour on horseback when the tourist season was at its peak from February to June.

“The income we generated during the peak season helped us support our expenses during the rainy days. But since the city closed in February, we didn’t have any income at all going into lockdown,” Lim said.

At the onset of the new coronavirus disease (COVID-19) pandemic, the pony boys received P5,500 from the government’s social amelioration program and food packs from the city government.

“Some kindhearted patrons also gave us food for our families and feed pellets for our horses,” Lim said.Many horse owners also turned to selling organic fertilizer made of horse manure for P150 a sack for additional income.Lim has been making horseshoes as another alternative source of livelihood. “Some of us have opted to work in construction or depend mainly on our savings [from other jobs],” he said.But their meager income from odd jobs could barely support the daily expenses of owning a horse and supporting a family, he said.According to Lim, an adult horse needs to be fed with 2 kilograms of feed pellets twice a day and five sacks of grass per meal. A 40-kg sack of pellets costs P850 while a bale of grass costs P300. These are enough for a horse for 10 days. Since the quarantine, the horses were being fed only once a day while their meal portions were also cut in half.

The city government has promised two cavans (100 kg) of feed pellets and supplements per horse that the handlers are still waiting to receive.They said the city government has also plans to equip Wright Park with temperature scanners, a washing area and hand sanitizers as part of health protocols against COVID-19.

Limited to residentsSome tourism activities have remained limited to residents while the city eases restrictions under modified general community quarantine this month.On July 11, Wright Park resumed its operation for local tourism, but only 20 horses had been allowed for riding rental, a stark contrast to the 200 horses before the pandemic.

But the event was only a “dry run,” said Darwin Alquizar, vice president of the Wright Park Pony Boys Association. His group, he said, planned to allow horseback riding only on weekends.Lim said the pony boys hoped that tourism in the city could bring back its lost glory with Baguio’s projected opening in September. For now, they were thankful that none of them had contracted the virus. INQ