BEIJING — Chinese authorities have pressed criminal charges against 23 people for illegal building alterations that led to the collapse of a quarantine hotel in which 29 people died and 42 were injured in March, state media reported Tuesday. 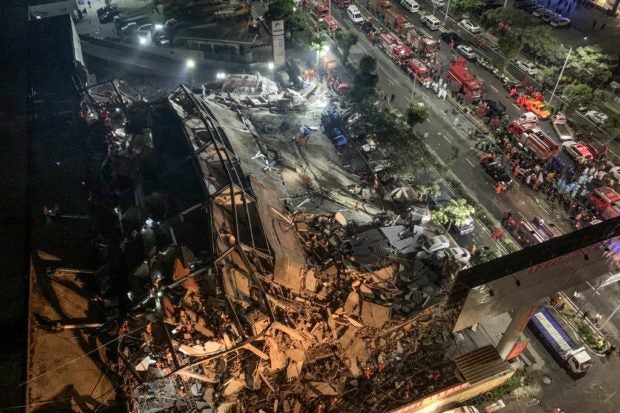 Rescuers search for survivors in the rubble of a collapsed hotel in Quanzhou, in China’s eastern Fujian province on March 7, 2020. Around 70 people were trapped after the Xinjia Hotel collapsed on March 7 evening, officials said. Photo by STR / AFP

The 66-room Xinjia Hotel in southern China’s Quanzhou city collapsed on March 7, burying dozens of people who had been made to quarantine there because of their recent travel to regions hard hit by COVID-19.

An official investigation found that three floors had been added illegally to the hotel’s original four-story structure, and safety assessors had colluded with the hotel’s owner to produce false reports about the building, state broadcaster CCTV said.

“Criminal enforcement measures” have been taken against 23 people involved with the construction, while local officials are being investigated for possible corruption connected to the collapse, according to CCTV.

Quanzhou’s mayor Wang Yongli has been reprimanded for dereliction of duty, along with dozens of other civil servants, Fujian province’s official corruption watchdog said in a statement Tuesday.

The first floor of the hotel had been undergoing renovation since before the Lunar New Year holiday in January, and authorities in March said construction workers called the hotel’s owner minutes before the collapse to report a deformed pillar.

China is no stranger to building collapses and deadly construction accidents that are typically blamed on the country’s rapid growth leading to corner-cutting by builders and the widespread flouting of safety rules.