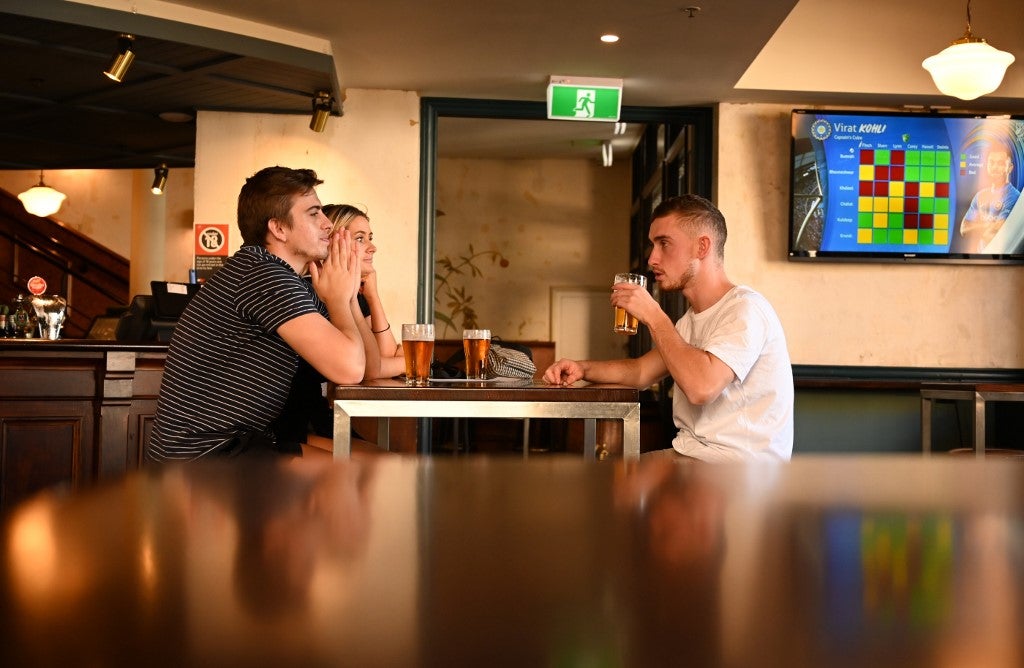 Patrons drink beer at a pub in the Rocks area of Sydney on June 1, 2020. – Social distancing regulations eased across Australia on June 1 with restaurants, pubs and cafes in New South Wales being allowed up to 50 patrons if social distancing is possible. (Photo by PETER PARKS / AFP)

SYDNEY, Australia — Sydney pubs were ordered to clamp down on customer numbers Tuesday as a coronavirus outbreak worsened in Australia’s two biggest cities.

New South Wales (NSW) authorities told the venues to limit crowds to 300 and hire security staff to enforce social distancing after a “super-spreader” event at a popular bar in the city’s southwest fuelled fears of a second wave of the epidemic.

In the neighbouring state of Victoria — which has become the epicentre of coronavirus in Australia — officials reported two new deaths Tuesday, taking the total to 110 for the country of some 25 million.

There were 270 new infections in and around Melbourne, pushing the national total past 10,000.

More than five million residents in the Melbourne region were ordered into a six-week lockdown last week in an effort to curb the outbreak, and NSW officials warned similar restrictions may have to be reintroduced in Sydney.

“There is no doubt that the impact of what’s happening in Victoria has impacted New South Wales and that’s why we are in a stage of high alert,” state Premier Gladys Berejiklian told media on Tuesday.

Cases linked to the Crossroads Hotel — which sits on a major Sydney road artery — grew to almost 30 on Tuesday. Visitors to a nearby pub and a department store were told to self-isolate as the list of venues caught up in the cluster expanded.

“It is important that we cast the net very wide, and then incrementally draw it back,” NSW chief health officer Kerry Chant said.

The recent spike in cases around Melbourne and Sydney has forced regions around the country to reconsider reopening to domestic travel.

All Australian states and territories had already closed their borders to residents of Victoria.

Most states and regions have reported few or no new daily cases of the disease in recent weeks, allowing much of the country to ease restrictions on movement and gatherings.