WASHINGTON — American Airlines said Monday it had contacted Republican Senator Ted Cruz after he was seen without a mask on a flight, but he said he had only removed it to eat and drink. 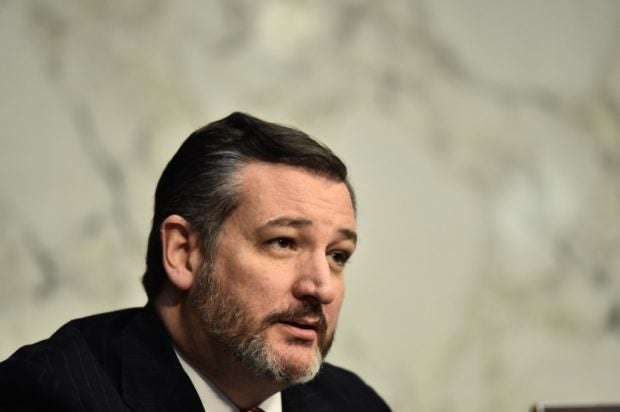 In this file photo taken on January 15, 2019 Sen. Ted Cruz (R-TX) speaks as William Barr, nominee to be US Attorney General, testifies during a Senate Judiciary Committee confirmation hearing on Capitol Hill in Washington, DC. American Airlines said on July 13, 2020 that it had contacted top Republican Senator Ted Cruz about its coronavirus prevention policies after a photo of the Texas lawmaker without a mask on a flight went viral on social media. Photo by Nicholas Kamm / AFP

Health experts and scientists have called on politicians to set an example by wearing face coverings as the coronavirus rages across the United States.

“While our policy does not apply while eating or drinking, we have reached out to Senator Cruz to affirm the importance of this policy,” American Airlines said in a statement.

The Texas lawmaker was holding a coffee cup and a phone in the widely-shared photo, but there was no mask in sight.

“During his flight he removed his mask to drink and put it back on afterward,” a spokeswoman for Cruz said. “We should all practice common sense measures to slow the spread of the virus.”

Wearing a mask in the United States has become a heavily politicized issue in recent months.

President Donald Trump was only seen in one for the first time on Saturday when visiting a military hospital.