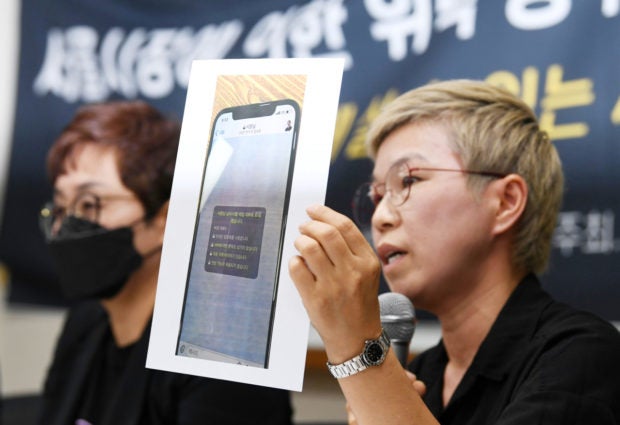 Park was found dead in the early hours of Friday at age 64 while serving his third term as mayor after allegations of sexual misconduct emerged.

“This case is a sexual harassment case by power of former Seoul Mayor Park Won-soon against his secretary. The victim was not able to refuse nor raise issues, overwhelmed by (his) tremendous authority,” Lee Mi-kyoung, director of the Korea Sexual Violence Relief Center, said during a press conference at the office of the Korea Women’s Hotline group in Seoul. The alleged victim did not appear at the conference.

Lee called on law enforcement authorities to continue their investigation into the case and bring Park’s alleged wrongdoing to light. The case has been dropped, as is typically done when the accused has died.

“Park was a social leader who had been interested in women’s rights but he also sexually objectified a female worker and sexually harassed her,” she said.

According to Kim Jae-ryun, a lawyer representing the victim, the former secretary testified to police on Thursday, after filing the complaint against the mayor the previous day. She now works in a different division at the Seoul Metropolitan City government, the attorney said. Park’s abuse of the secretary dates to 2017, when she started working for him, and continued during work and off-work hours even after she was transferred to another division in the city government early this year.

“He asked her to give a hug and made physical contact after calling her to a bedroom inside his office. He persistently sent lurid text messages and pictures, which included those of him in underwear,” Kim said. The lawyer showed a captured image of Park inviting the woman to a secret mobile chat room on the mobile messaging app Telegram.

In a statement read by a civic group official, the victim said she wanted to receive “a humane apology and be judged by law” in the country.

Her request for help was ignored by colleagues in the city government who told her that the series of misconduct could be “simple mistakes,” because the mayor was “not a person who would do such a thing.”

“I wanted to shout to him to not behave like this within the safety of a court. I wanted to cry out that I’m in pain. I wanted to forgive. I wanted to receive a humane apology and be judged by law in South Korea, which is a law-governed country,” she said.

The victim has submitted an additional complaint with police on the “secondary damages” that have been inflicted following Park’s death, the lawyer said.