MANILA, Philippines — President Rodrigo Duterte said he has dismantled oligarchy in the Philippines without declaring martial law and vowed that the remaining years of his presidency will be harsh for oligarchs.

In a taped speech in Jolo, Sulu aired Tuesday morning, Duterte said that he can now die happy knowing that he has “dismantled” oligarchy in the country which he said has milked Filipinos and even manipulated the economy and elections for years now.

(That’s how they played my country. So if I die, if the plane crashes, I will be very happy. You know why? Because without declaring martial law, I dismantled the oligarchy that controlled the economy and the Filipino people.) 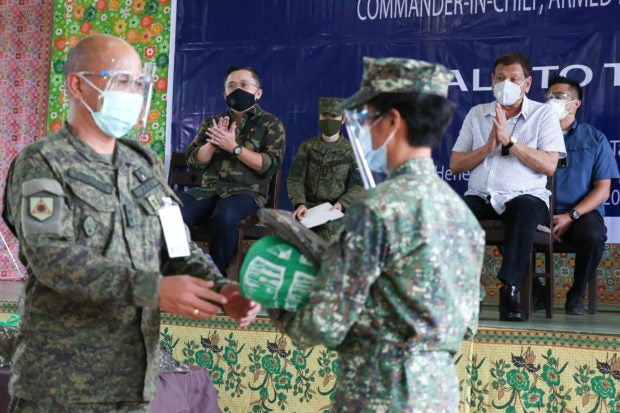 President Rodrigo Roa Duterte witnesses the ceremonial distribution of food packs to the troops during his visit to the Kuta Heneral Teodulfo Bautista Headquarters in Jolo, Sulu on July 13, 2020. ALBERT ALCAIN/PRESIDENTIAL PHOTO

He then warned that the remaining years of his administration will be harsh for oligarchs.

Duterte made the statement after the House of Representatives panel on legislative franchises voted to reject broadcast giant ABS-CBN’s franchise application.

ABS-CBN was ordered shut on May 5 following the expiration of its legislative franchise, in compliance with the National Telecommunications Commission’s (NTC) shutdown order.

The NTC order follows Duterte’s repeated public rants against the Lopez-owned television network which he had repeatedly lambasted for not airing his 2016 presidential campaign advertisement.

In a speech on Dec. 3, 2019, Duterte said he will see to it that ABS-CBN’s franchise application is rejected.

Last month, Duterte said the water concessionaires must “return” billions of pesos to the government and accept the new deals crafted by his administration, or else they will face charges.