GENEVA — The World Health Organization’s chief on Monday slammed some government leaders for eroding public trust by sending mixed messages on the coronavirus and warned that their failures to stop their countries’ spiraling outbreaks mean there would be no return to normal “for the foreseeable future.” 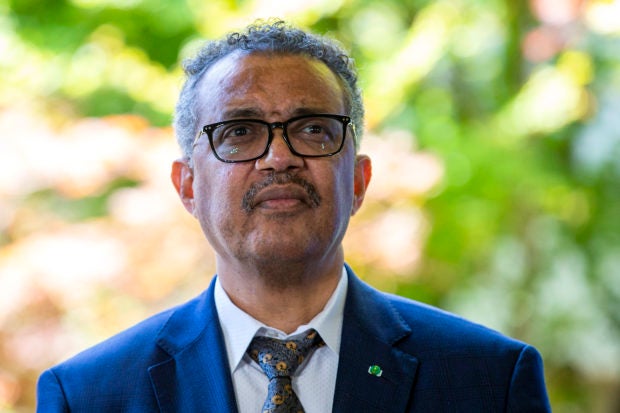 FILE – In this Thursday, June 25, 2020 file photo, Tedros Adhanom Ghebreyesus, Director General of the World Health Organization (WHO), attends a press conference, at the World Health Organization (WHO) headquarters in Geneva, Switzerland. The head of the World Health Organization dismissed complaints from countries complaining that contact tracing is too difficult to implement as a control strategy for the pandemic as “lame.” The U.N. health agency has repeatedly advised countries that shutting down their COVID-19 outbreaks requires having a strong contact tracing program in place, a labour-intensive process of tracking down contacts of people with coronavirus to ensure those at risk isolate themselves. (Salvatore Di Nolfi/Keystone via AP, File)

WHO Director-General Tedros Adhanom Ghebreyesus did not call out specific politicians for criticism but said “too many countries are headed in the wrong direction” with the pandemic and some were not taking the proper steps to curb infections.

At the same time, Tedros acknowledged how difficult it was for governments to respond effectively, given the economic, social and cultural consequences of imposing restrictions.

“The virus remains public enemy No. 1, but the actions of many governments and people do not reflect this,” he said.

The director-general’s remarks to reporters in Geneva came a day after WHO reported yet another worldwide record of more than 230,000 confirmed cases in 24 hours.

Ten countries accounted for 80% of the daily tally reported Sunday, and more than half of the new confirmed cases came from the United States and Brazil alone.

The U.N. health agency said government and individual responses should depend on local conditions – namely, whether there is widespread community spread of the virus.

Take schools: Many countries have reopened classrooms as their daily case counts fell, but some nations are playing “political football” by calling for schools to reopen without having broader control measures in place such as keeping shops closed or limiting public gatherings, WHO said.

“Mixed messages from leaders are undermining the most critical ingredient of any response: trust,” Tedros said Monday, adding that governments should communicate clearer public health messages and individuals should maintain social distancing, mask-wearing, hand-washing and staying home when they have COVID-19 symptoms.

As the U.K. emerges from a nationwide lockdown, government leaders were chastised in recent days for giving inconsistent statements on the merits of wearing face masks inside public place, among other issues.

British Prime Minister Boris Johnson said Monday that people “should” wear masks in shops. But the day before, one of his top Cabinet ministers said during a TV appearance that face coverings should not be mandatory.

Without applying basic outbreak-control methods, “there is only one way this pandemic is going to go,” WHO chief Tedros cautioned.

“It’s going to get worse and worse and worse,” he said, continuing with a blunt warning. “There will be no return to the old normal for the foreseeable future.”

Still, WHO pointed to a sign of hope in countries that had experienced massive outbreaks and death tolls and managed to get the virus under control.
Leaders in countries like the United States, Brazil and India that are still facing large outbreaks have variously rejected or played down advice or recommendations from scientific experts, advisers in government and their political allies to take tougher action.

Amid a debate in places like the United States about whether schools can reopen, the WHO’s emergencies chief said any such decisions require a broader outlook that takes into account how workplaces or long-term care facilities operate, too.

“We can’t turn schools into yet another political football in this game. It’s not fair on our children,” Ryan said. “We have to make decisions that are based on the best interests of our children, be it their educational or their health interests.”

U.S. President Donald Trump has pressured school districts in America to reopen this fall, threatening to cut off funding for ones that don’t comply.