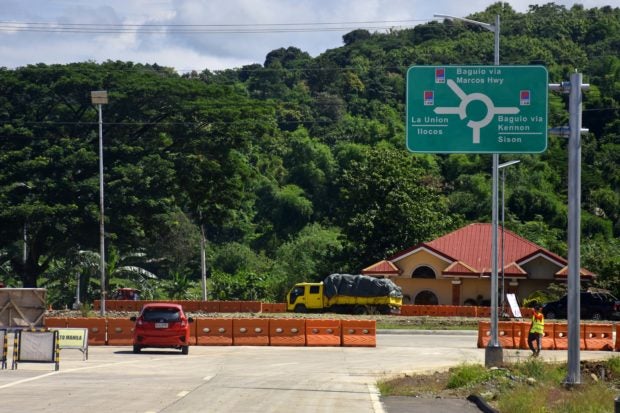 LA UNION EXIT A smooth ride along the recently completed section of Tarlac-Pangasinan-La Union Expressway brings travelers to a rotunda at Rosario, La Union, where they can proceed to Baguio City or the Ilocos region. —WILLIE LOMIBAO

DAGUPAN CITY—The last phase of the 88.85-kilometer Tarlac-Pangasinan-La Union Expressway (TPLEx) will be opened to motorists on Wednesday, reducing travel time from Manila to Baguio City and other destinations in northern Luzon by an hour, from at most four hours to three hours.

Public Works Secretary Mark Villar recently inspected the new 11.45-km road stretch from Pozorrubio, Pangasinan province, to Rosario, La Union province, which was designed to complete the TPLEx that would integrate with other major toll roads.

“With the completion of the last portion of originally designed TPLEx toward Rosario rotunda, traveling to the Ilocos region and Baguio City in the Cordillera will now be easy,” Villar said in a statement.

He said the final segment of the P24-billion, four-lane TPLEx would save motorists by as much as three hours of traveling between Manila and Baguio City.

The final section would also shorten travel time from Tarlac province to Rosario by an hour from more than three hours.

The final phase was originally scheduled to be operational in April but was postponed due to the coronavirus pandemic.

The toll road is connected to Subic-Clark-Tarlac Expressway and North Luzon Expressway, which extends to Metro Manila. —YOLANDA SOTELO INQ