A man in Australia caught for speeding apparently had good reason for driving as if his life depended on it.

The man only identified as Jimmy, 27, was pulled over by a Queensland traffic officer for going at 123 kilometers per hour last June 15, as per a statement and video from the Queensland police on July 7.

He said it was because he was rushing to get medical help after fighting a snake while driving.

When the officer approached his utility truck, Jimmy quickly explained that there had been a snake in the vehicle.

“I think it has bitten me. It was in the car with me. You can feel my heart, mate,” he said.

This slimy passenger would be sure to make any driver hysssssterical! 🐍😱

After the officer saw the dead snake lying at the back of the truck, he called for paramedics. The snake species was the eastern brown snake, which is highly venomous.

Jimmy explained that the snake came into the truck near the gearstick and went in between his legs. He was driving at 100 kilometers per hour at that time. 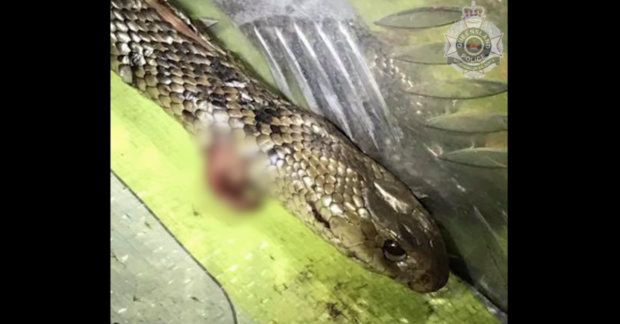 The snake seen in the back of the driver’s truck. Image: screengrab via Facebook/@QueenslandPolice

“It started to wrap around me and then its head just [started] striking at the chair,” he recalled.

The driver tried to stop the car by braking, and at the same time defended himself from the snake using a work knife and the seat belt. He then threw the snake at the back of the truck.

Jimmy thought he had been bitten and was rushing to a hospital, hence the speeding. When paramedics arrived, it was found that the driver had not been bitten but was instead in shock.

The Queensland department of health advises on its website, “While it’s easier said than done, staying calm and still after a snake bite can help slow down the spread of venom in your body. If you’ve been bitten by a poisonous snake, not moving might save your life.” JB