WASHINGTON — The posters started blanketing light posts just a few weeks after the city entered what would be a monthslong stay-at-home order. Vividly colored and bearing a three-headed mushroom, they asked Washingtonians to “reform laws for plant and fungi medicines” by making natural psychedelics “the lowest level police enforcement priority.” 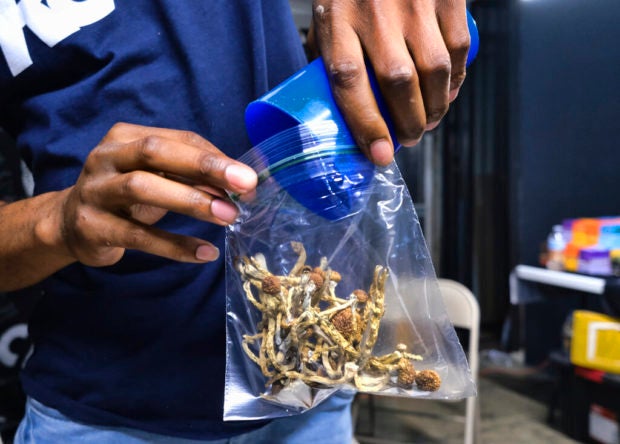 In this May 24, 2019, file photo a vendor bags psilocybin mushrooms at a pop-up cannabis market in Los Angeles. Despite pandemic conditions that made normal signature-gathering almost impossible, activists in the nation’s capital say they have enough signatures for a November ballot initiative that would decriminalize natural psychedelics such as mescaline and psilocybin mushrooms. AP Photo/Richard Vogel, File

It was the start of an underdog campaign that just managed a truly improbable political feat: a successful grassroots petition drive conducted entirely under pandemic lockdown conditions.

Last Monday, activists presented more than 36,000 signatures to the Board of Elections. If the signatures hold up through the verification process, voters in the nation’s capital will face a November ballot initiative that would decriminalize psilocybin “magic” mushrooms and other natural psychedelics like mescaline.

If passed, it would be the first of its kind for an Eastern city; Denver became the first U.S. city to pass such an initiative in May 2019, with the California cities of Oakland and Santa Cruz following suit. It would also likely face efforts in Congress to overturn or block its implementation.

Activists are deemphasizing the recreational aspects of the drugs, focusing almost exclusively on the therapeutic and medical benefits as treatment for depression, trauma and addiction.

“D.C. could really lead the way on this,” said campaign manager Melissa Lavasani. “You shouldn’t bear the repercussions of the drug war while you are healing yourself.”

Just getting on the ballot required a innovative change in normal grassroots signature-gathering tactics and an assist from the D.C. Council. Activists had planned to launch their campaign in March with traditional door-to-door canvassing and street-corner volunteers. But they decided to hold off as the novel coronavirus made inroads and the local infection numbers started climbing. By April, it became clear that the lockdown would last months and they decided to proceed anyway.

“Part of it was me just not wanting to give up,” Lavasani said. “We were already organized and we didn’t want to just lose the year.”

They did briefly try some door-to-door in the Capitol Hill neighborhood, but found that families under virus lockdown weren’t really receptive to a stranger at the door with a clipboard. So they shifted tactics and appealed to the D.C. Council for help. The council, as part of a larger coronavirus relief package, approved a landmark set of changes that allowed residents to download a copy of the petition, sign it and submit a picture of the signed paper.

Volunteers set up signature booths outside grocery stores, at polling stations on the day of Washington’s primary election and even at the site of the city’s ongoing protests over systemic racism and police brutality.

Organizers also mailed copies of the petition and detailed packages centering around Lavasani’s family and her personal story to about 220,000 households. A D.C. government employee and a mother of two, she says she successfully treated crippling post-partum depression that included suicidal thoughts with controlled doses of psilocybin mushrooms and later with another natural psychedelic called ayahuasca.

“I started micro-dosing with psilocybin and within a matter of days I felt like myself again,” she said. “It was really scary to know that if anybody found out I was doing this, I would lose everything.”

It’s a message that Lavasani believes will resonate in a nation reeling under the psychological burdens of an ongoing pandemic, nationwide protests over racial injustice and what promises to be the most divisive presidential election in living memory.

“We’re going to be in rough shape when we get through this and we’re going to need all the help we can get,” she said. “There’s a lot of people suffering out there.”

It’s also a message that had gained a foothold within mainstream scientific circles. A growing body of work is looking at the effects of natural psychedelics to treat depression, trauma and addiction. Last year, Johns Hopkins University opened the Center for Psychedelic and Consciousness Research with plans to study the effects of psychedelics on a host of ailments, from anorexia to Alzheimer’s disease.

In an article, center director Roland Griffiths called natural psychedelics “a fascinating class of compounds” that can “produce a unique and profound change of consciousness over the course of just several hours.”

The proposed D.C. ballot initiative would apply to psilocybin mushrooms, iboga, mescaline and ayuhuasca, but not to peyote or to man-made psychedelics like LSD. It would instruct the Metropolitan Police Department to treat such substances as a low priority. If successful, Lavasani said she envisions patients being able to consume such substances in controlled circumstances and in consultation with doctors or therapists.

But even if it passes, Lavasani acknowledges that it will probably be blocked in some way by Congress, which retains the right to alter or even overturn D.C. laws. When a 2014 ballot initiative approved legalizing marijuana use, Congress stepped in and prohibited the district government from spending any funds or resources on developing a regulatory or taxation system for marijuana sales. The result has been a thriving “gift-economy” gray market where customers and dealers maintain the thin pretense that they’re actually buying something else like a T-shirt and receiving the marijuana as a complimentary gift.

Maryland Republican Rep. Andy Harris, who sponsored the budget rider that blocked the 2014 marijuana initiative, has already indicated in press interviews that he plans to do the same if this new initiative passes. A spokesman for Harris declined to comment further on the issue. Rep. Eleanor Holmes Norton, Washington’s nonvoting delegate in the House of Representatives, has vowed to oppose any such effort.

“We will continue to fight any and all attempts to overturn D.C. laws, regardless of the policy, as D.C. has a right to self-government,” Norton, a Democrat, said in a statement.

Lavasani said she would rather not see such psychedelics simply added to that gray-market mix. She’s hoping for an upcoming “blue wave” in November elections that would shift the Senate to Democratic hands and smooth the path of Washington’s quest for statehood. The Democratic-controlled House approved a landmark D.C. statehood bill in June, but it faces insurmountable opposition in the Republican-held Senate.

For now, Lavasani said she plans a citywide educational initiative in advance of the November vote. She’s counting on the idea that ordinary voters, far from the psychedelic heyday of the 1960’s, no longer regard natural psychedelics with the kind of stigma attached to marijuana and other drugs.

“There’s more of a blank slate compared to cannabis,” she said. “A lot of people have a real issue with weed.”