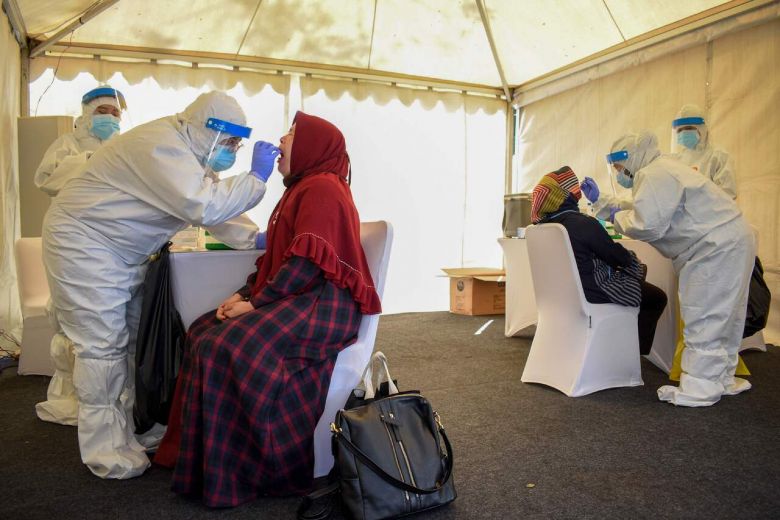 Health workers conduct a swab test on civilians, some of 28 living in the compounds of the Indonesian army’s Officer Candidate School in Bandung, on July 11, 2020. PHOTO: AFP

JAKARTA — The World Health Organization has urged Indonesia to perform more Covid-19 polymerase chain reaction (PCR) tests on people suspected to have the illness because it has noted a “substantially high” number of deaths among patients under surveillance (PDP) and people under observation (ODP).

The WHO acknowledged that Indonesia had improved its testing capacity significantly but said many of the PCR tests had been used on people already known to have Covid-19 – as the old WHO guidelines required.

The organization changed the guidelines more than a month ago.

“Indonesia has a substantially high number of deaths of patients under surveillance [PDP]and people under observation [ODP]. Therefore, PCR tests should be prioritized for the diagnosis of suspected cases [PDP AND ODP]rather than for follow-up tests for patients to be discharged,” the WHO said in its latest situation report for Indonesia.

The organization said it had revised the patient discharge criteria in a set of guidelines published on May 27. A confirmed Covid-19 patient who is hospitalized no longer requires two consecutive negative PCR tests for release, as was the requirement previously.

As of July 10, Indonesia had conducted a total of 1,015,678 PCR tests. However, because the old WHO guidelines on discharging patients required hospitals to test confirmed patients multiple times, only 597,468 distinct people had been tested, meaning only 58.8 per cent of the PCR tests had been used on people who hadn’t been tested before.

“If adopted country-wide, this prioritization of PCR tests would mean improved diagnoses of suspected Covid-19 cases,” the WHO said.

Quoting Pandu Riono, an epidemiologist at the University of Indonesia, the WHO advised the governors of Jakarta, West Java and other cities with many cases to double or triple the rate of PCR testing “to get a better understanding of the spread of the disease throughout the country”.

Covid-19 watchdog Kawal Covid-19 has shown that, as of July 9, there were at least 6,875 deaths among PDP and 485 deaths among ODP. The organization collected the information from suspected case data posted on provincial administrations’ websites. Not all provinces have released such data. Bali, for example, has withheld its provincial figures.

The combined number of deaths – 7,360 – was much higher than the cumulative deaths among confirmed patients: 3,781 as of July 9.

Since April, the WHO has also revised its recommendation for Covid-19 death reports, encouraging countries to include the deaths of both probable and confirmed patients. A probable patient, according to the WHO, is one for whom Covid-19 testing was inconclusive or on whom testing could not be performed.