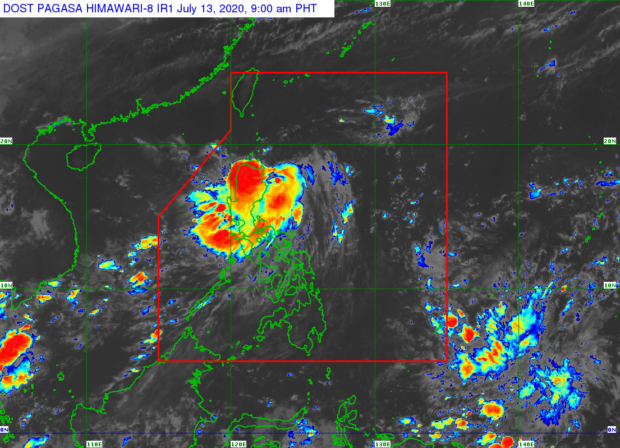 MANILA, Philippines — Tropical Depression Carina is forecast to turn northwestward and move over the Luzon Strait, passing close to the northeastern portion of Cagayan and Babuyan Islands between Monday night and Tuesday morning, according to the state weather bureau.

Areas under TCWS No. 1 may experience winds of 30 to 60 kph in at least 36 hours or intermittent rains within 36 hours.

“Accounting for the forecast track probability cone, a landfall scenario over these areas remains a possibility,”   Pagasa said in its 8 a.m. bulletin.

The center of “Carina” was last located 275 kilometers east of Tuguegarao City, Cagayan. The tropical depression is moving west at 20 kilometers per hour (kph) and has maximum sustained winds of 45 kph and gustiness of 55 kph.

According to Pagasa, moderate to heavy rains will be experienced over Babuyan Islands and the eastern section of mainland Cagayan and Isabela.

Meanwhile, light to moderate with at times heavy rains will be observed over Ilocos Region, Cordillera Administrative Region, the rest of Cagayan Valley, Aurora, and the northern portion of Quezon including Polillo Islands.

Cloudy skies with scattered rain showers and thunderstorms will prevail in the rest of Luzon, including Metro Manila, as well as the Visayas and Mindanao.

“Carina” is expected to weaken into a low pressure area on Wednesday.

Pagasa warned that flooding and rain-induced landslides may occur during heavy or prolonged rainfall especially in areas that are highly susceptible to these hazards.

“The public and disaster risk reduction and management offices are advised to take appropriate measures and monitor the Rainfall or Thunderstorm Advisories or Heavy Rainfall Warnings of PAGASA Regional Services Divisions,” the weather bureau said.

Moderate to rough seas will be experienced over the northern and eastern seaboards of Luzon in the next 24 hours. Operators and crew of small vessels are advised not to venture out to sea.

The center of “Carina” is forecast to be located 70 kilometers east of northeast of Cagayan on Tuesday morning, and 285 km north of Basco, Batanes on Wednesday morning.