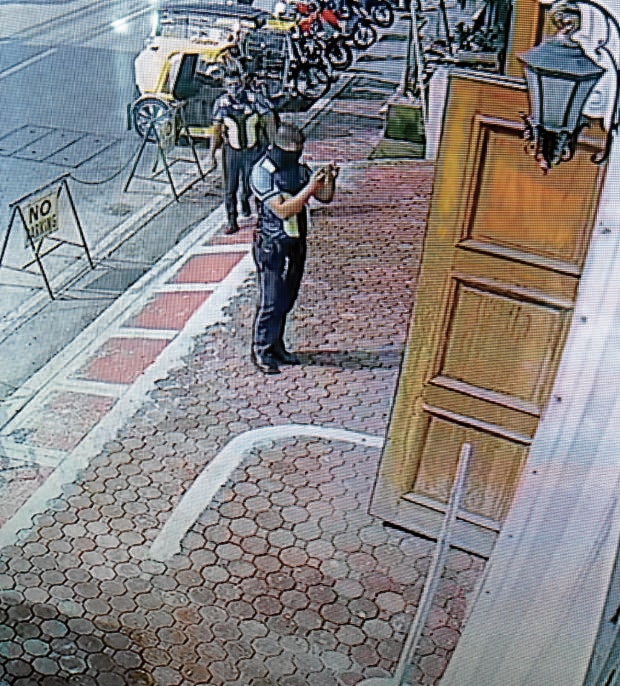 DISTURBING Employees from the Quezon City’s Department of Public Order and Safety are seen on the CCTV camera when they show up at San Isidro Labrador Parish Church in Quezon City on Sunday morning. Their action of taking pictures and videos in and out of the church during the Mass without prior approval has alarmed the parish priest, Fr. Robert Reyes. —PHOTO COURTESY OF FR. ROBERT REYES

MANILA, Philippines — A Catholic priest on Sunday expressed concern over the actions of three uniformed personnel from the Quezon City’s Department of Public Order and Safety (DPOS) who took photos and videos during his morning Mass at San Isidro Labrador Parish without the parish’s prior knowledge and consent.

Fr. Robert Reyes, popularly known as the “running priest,” sounded the alarm over the “suspicious” actions of the uniformed men who were seen in footage from a closed-circuit television (CCTV) camera installed outside the church on Malakas Street in Barangay Pinyahan.

Reyes said this was the first time that it had happened in the parish, raising worries for his safety and that of his parishioners.

“Their behavior was very suspicious … If they were on official business, they should have the courtesy first to ask permission,” he said in a phone interview.

DPOS chief Elmo San Diego confirmed that it was his men who went to the parish on Sunday morning, but he defended their actions as “routine inspection” to ensure that physical distancing during religious services was observed.

“No need for permission,” he said in a text message. “The church is an open [place]. Anyone can come in and observe.”

Catholic churches in Metro Manila resumed religious services on Saturday, with the assurance that guidelines consistent with the policies set by the Inter-Agency Task Force for the Management of Emerging Infectious Diseases were followed. These include physical distancing and temperature checks.

San Diego said he directed DPOS personnel to check on the church activities during the weekend but added that no arrests would be made.

“But take note what churches are not following … Next week, we will begin the arrests, even if they are priests or imams, as long as they do not follow the guidelines,” he said in an order which he shared with the Inquirer.

In the CCTV footage, three DPOS personnel, all of them wearing face masks, were seen arriving at the church at 8:23 a.m., as a Mass scheduled at 8 a.m. was ongoing. Only one of them went inside, and the two others remained outside the door.

Written at the back of their uniforms was “Quezon City TF-TTM,” referring to the Task Force for Transport and Traffic Management.

The DPOS officer who went inside the church began to take photos and videos as Reyes, presiding over the Mass, read the homily. Some parish staff members noticed what the officer was doing but did not approach or stop him out of fear, they said.

The three men left after a few minutes. The last one to leave was seen making the Sign of the Cross just before walking away.

“I think what they did was not standard operating procedure,” Reyes said. “It is an infringement, a violation of the sanctity of the Eucharist.”

He said the guidelines for religious gatherings were followed, with the number of churchgoers kept to a minimum. Pews that could seat 10 to 11 were only occupied by three people, he said.

The priest also said another three other people from the DPOS went to the church on Sunday afternoon, but they were more polite than the men who arrived in the morning. They asked permission before going inside the church to look around, which Reyes granted.

Reyes said San Diego’s comments on arresting priests and religious leaders was “very disturbing” and expressed concern over the safety of those who were critical of the Duterte administration, including himself.

“We know how they can easily interpret violations according to their bias and without due process,” he said.