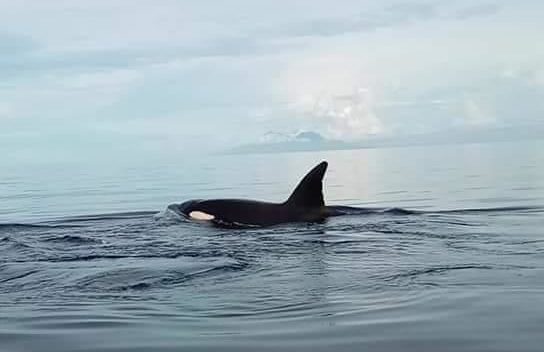 Orcas or killer whales, the largest among the dolphins, were sighted in the waters off Garcia Hernandez town, Bohol. (Photo courtesy: Jervin Galido)

TAGBILARAN CITY – Pods of dolphins reappear in the waters off Garcia Hernandez town in Bohol three months after tourism activities were stopped because of the coronavirus disease (COVID-19) pandemic.

Ruel Baguhin, 37, considers the presence of dolphins in the municipality as “rare” and “surprising” since the last time residents have seen the aquatic mammals was some decades ago.

Residents have been spotting bottlenose and spinner dolphins as well as orcas or killer whales starting last June 29.

The presence of dolphins in the waters off Barangay Cayam prompted residents to look for them in the open sea.

Those who had close encounters with the dolphins posted photos and videos of the sea mammals on social media.

According to National Geographic, orcas or killer whales are considered the largest among the dolphins and are among the world’s most powerful predators. They are recognized through their distinctive black-and-white colors.

He said he and friends spotted them at around 5 p.m.

“It was my first time seeing dolphins here although I learned that some fishermen have had sightings of them in the past,” Galendez said.

The Bohol Sea is one of the breeding grounds of whales and dolphins.

They used to be seen in the seas off Jagna, Garcia Hernandez, Lila, and Pamilacan Island in Baclayon town, known as the highway of whales and dolphins.

However, sightings of these creatures diminished in the early 1990s due to rampant whale and dolphin hunting.

An outcry from local and foreign conservationists triggered the ban on the hunting of dolphins and whales.

The Philippines, one of the first countries in Southeast Asia that came up with policies protecting marine mammals, banned the catching, selling, or transporting of dolphins and whales in 1992 through Fisheries Administrative Order 185.

In 1998, the Animal Welfare Act was also enforced. In 2001, the Fisheries Administrative Order 208 was implemented to conserve rare, threatened, and endangered species which included whales and dolphins.