US and Vietnam now can call each other friends—US Ambassador 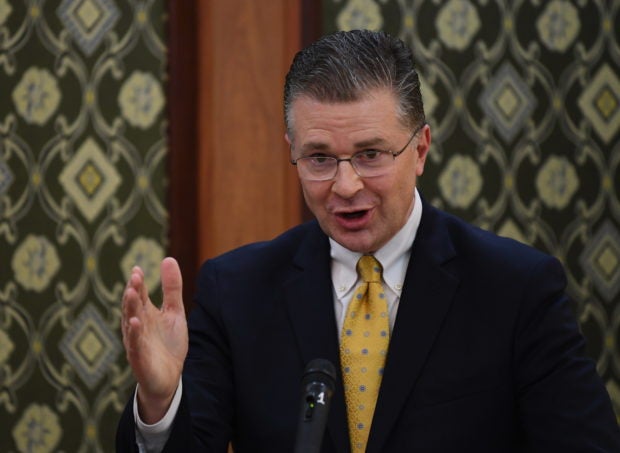 HANOI — The US-Vietnam partnership is the strongest it has ever been, the US Ambassador to Vietnam Daniel Kritenbrink said ahead of the 25th anniversary of two countries’ diplomatic ties.

On July 11, 1995, the former US President Bill Clinton announced normalization with Vietnam in Washington DC. On July 12, 1995, late Vietnamese Prime Minister Võ Văn Kiệt made a statement to establish diplomatic relations with the US, opening a new chapter in the two nations’ history for reconciliation and growth.

“Today we can sincerely call one another friend and partner,” said the US Ambassador.

“It is extraordinary how quickly we have made progress and how quickly and successfully we have built partnership and friendship between the US and Vietnam. We should be proud of that.”

The process of normalizing relations was launched earlier. In April 1991, a roadmap plan for phased normalization was presented to Vietnam by the George H W Bush administration, starting by opening a US governmental office in Hà Nội to deal with MIA (missing in action) issues.

“When the two countries established the diplomatic relation 25 years ago, we first had to look back, facing the legacies of war, working with veterans and others affected on both sides so that we could turn to the future and build the framework for partnership and friendship as we see today,” Ambassador Kritenbrink commented.

“The US will remain committed to being responsible to war-related issues including dioxin detoxification in Biên Hoà Air Base in HCM City and UXO clearance in central Vietnam,” he said, adding the co-operation “has built a very strong foundation for trust between the two countries”.

On February 3, 1994, the trade embargo against Vietnam was lifted by President Bill Clinton.

“It has gone from virtually no trade to a US$77 billion bilateral trade flow,” he said.

“We are eager to build trust between the US and Vietnam, making sure that economic and trade relationship is increasingly fair, free and balanced.”

According to the ambassador, the relationship between two militaries directly contributes to strong security and assures mutual beneficial economic prosperity for both sides.

“Our growing security and defense relationships reflect the fact that our security interests are very much alike,” he told the media.

“We are more interested in expanding the co-operation between our two militaries and advancing our work together on shared security priorities on the East Sea or in the Mekong Delta and even Korean Peninsula,” he added.

The US and Việt Nam set up a comprehensive partnership in 2013. No matter how the relationship is labelled, the US focuses more on “the real nature of our partnership and friendship and outcome of the two countries’ co-operation”, according to the ambassador.

“Our futures are linked,” he said, “we are very optimistic about the future and what we can achieve together in the next 25 years.”

Stressing trust as the foundation for the US-Vietnam’s diplomatic ties, the ambassador said the two countries have made significant progress in showing mutual respect for independence, sovereignty, territorial integrity and legal systems.

He complimented Vietnam on its response to COVID-19 pandemic.

“The US is proud to be Vietnam’s partner and support your country in responding to the pandemic,” he said.

“In these difficult times, masks and protective clothing donated by Vietnam help to save many American lives.”

Talking about his own experiences during his three-year tenure in Vietnam, Kritenbrink said visits to Trường Sơn National Martyrs’ Cemetery in Quảng Trị Province and HCM City Military Martyrs’ Cemetery were the most memorable.

The ambassador said the visits aimed to demonstrate respect for those who sacrificed their lives on both sides and contributed to peace and reconciliation between the two nations.

He recalled Pete Peterson, the first US Ambassador to Vietnam post-war, who had said US-Vietnam diplomatic relations were not a miracle.

“I do think about it a lot and really believe in what he said,” said Ambassador Kritenbrink.

“Our achievements were thanks to really hard work, courage, dedication and goodwill by leaders on both sides. I think we should keep that mindset, commit to this partnership together.”