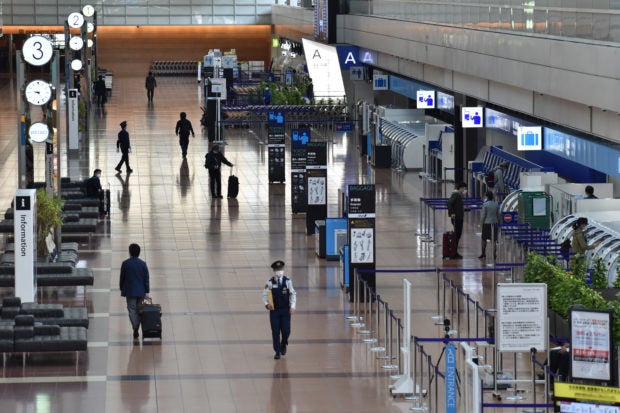 Passengers and staff are pictured at the departures floor of Tokyo’s Haneda airport on April 28, 2020. AFP FILE PHOTO

TOKYO — The Japanese government plans to increase the number of people who can receive PCR tests for the novel coronavirus at airports to about 10,000 per day in September, aiming to gradually resume international travel. It will hold talks with 10 countries and regions, including China, South Korea and Taiwan, as early as the middle of this month to adjust the number of visitors.

Currently, daily testing capacity for arriving passengers at Japanese airports is limited to 2,300 people, but the government plans to increase that to 4,000 by the end of August, through measures such as increasing outsourcing to the private sector. In September, it plans to set up PCR testing centers for Haneda, Narita and Kansai airports to handle 6,000 more travelers and bring the total capacity to 10,000.

Brunei, Cambodia, Laos, Malaysia, Mongolia, Myanmar and Singapore are also being considered by the Japanese government as areas for resuming travel, in addition to China, South Korea and Taiwan. These areas have strong economic ties with Japan, and coronavirus infection levels there have been relatively stable.

The government is shortly expected to hold a task force meeting headed by Prime Minister Shinzo Abe to decide on the basic policy including measures such as strengthening the testing system and adding more countries and regions to the list for resumption of travel. According to a government source, it is likely that travel to and from Taiwan will resume before travel to and from China and South Korea. The two countries are said to present a challenge for resuming exchanges for the time being because of the large number of people from them expected to enter Japan. The PCR testing capacity at Japanese airports is believed to not be enough for them.

Currently, people from a total of 129 countries and regions are denied entry to Japan. The government plans to give priority to the reentry of about 90,000 foreign businesspeople who have bases in Japan. These businesspeople had left Japan before the country introduced a system to deny entry to foreigners and they have been unable to reenter the country.