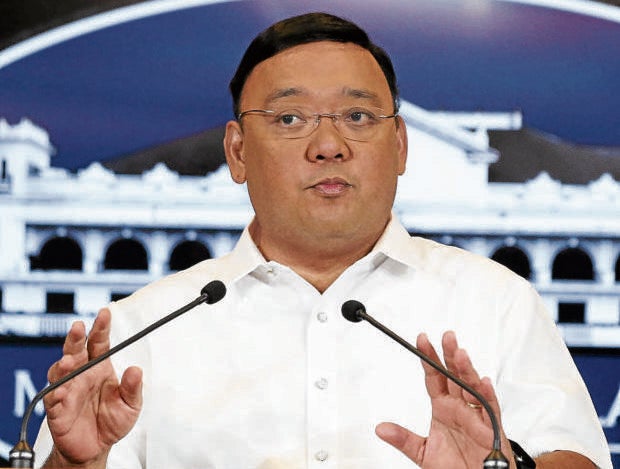 MANILA, Philippines — Presidential spokesperson Harry Roque on Saturday said the House committee vote to kill the franchise application of ABS-CBN should not be a cause for concern to other media entities.

“I do not believe in the chilling effect [of the franchise denial] because first of all, news is not ABS-CBN’s full-time business but entertainment,” Roque said in an interview with dzBB, radio station of ABS-CBN’s main rival, GMA Network.

He said the network’s top moneymakers were its noontime program Showtime and prime-time drama “Ang Probinsyano.”

“Even though many watch TV Patrol, it is not its main source of livelihood,” he said, referring to the network’s flagship evening news program.

Roque appealed to Filipinos to respect the lawmakers’ decision, saying that if they disagreed with it, they could replace them in the next election with legislators “who would vote in accordance with what the people want.”

The House legislative franchise committee on Friday voted 70-11 to reject ABS-CBN’s franchise application, citing, among others, the “cloud of doubt” over the Filipino citizenship of the company’s chair emeritus Eugenio “Gabby” Lopez III and the network’s use of Philippine depositary receipts that allegedly allowed foreign ownership of the media entity disallowed by the Constitution.

The House committee also cited ABS-CBN’s alleged illegal sale of its digital TV Plus boxes and for using tax shields and the franchise of Amcara Broadcasting Network Inc., another entity, without congressional authorization.

Vice President Leni Robredo said there were “wide-reaching implications” that came with the committee’s decision.

“It will have a chilling effect. Editorial choices in newsrooms across the country could change owing to how ABS-CBN was put through the wringer,” she said.

Robredo also said thousands would lose their jobs due to the House committee’s decision.

“It is saddening to think that this is the path that Congress has chosen to take, instead of pouring all their attention and energy into implementing programs to fight the coronavirus disease,” she said.

Robredo said the franchise denial, which followed the libel conviction of Maria Ressa, head of the online news outfit Rappler, and the signing of the antiterrorism law sent a clear message to the public — whoever dissents would be considered an enemy of the state.

But according to Sen. Panfilo Lacson, the members of the House committee really took their cue from President Rodrigo Duterte, whose leadership style he described as Machiavellian.

“If I may quote what Niccolo Machiavelli once wrote — ‘I’d rather be feared than loved if I cannot be both,’” Lacson said.

“Accept it or not, the President’s body language was obvious enough for the House leadership and allies not to read and interpret the way they voted yesterday,” he said.

On several occasions last year, Duterte strongly indicated he would block ABS-CBN’s franchise renewal and at one instance advised its owners to just sell the network.

ABS-CBN had earned the ire of Duterte for airing a campaign advertisement against him during the presidential election four years ago but not his own election propaganda and for its reportage on his bloody war on drugs.

Company president and CEO Carlo Katigbak had apologized to the President. In February, Duterte said he had accepted the network’s apology and that he would “not interfere” in the House decision to grant or deny its franchise.

Lacson said the President’s leadership style was a “class by itself” and “effective.”

Whatever reason the House members had in rejecting the ABS-CBN franchise, it was clear that the power to grant it lies with them, he added.

To ABS-CBN he said: “You fall today, you will rise tomorrow, and that’s for sure.”