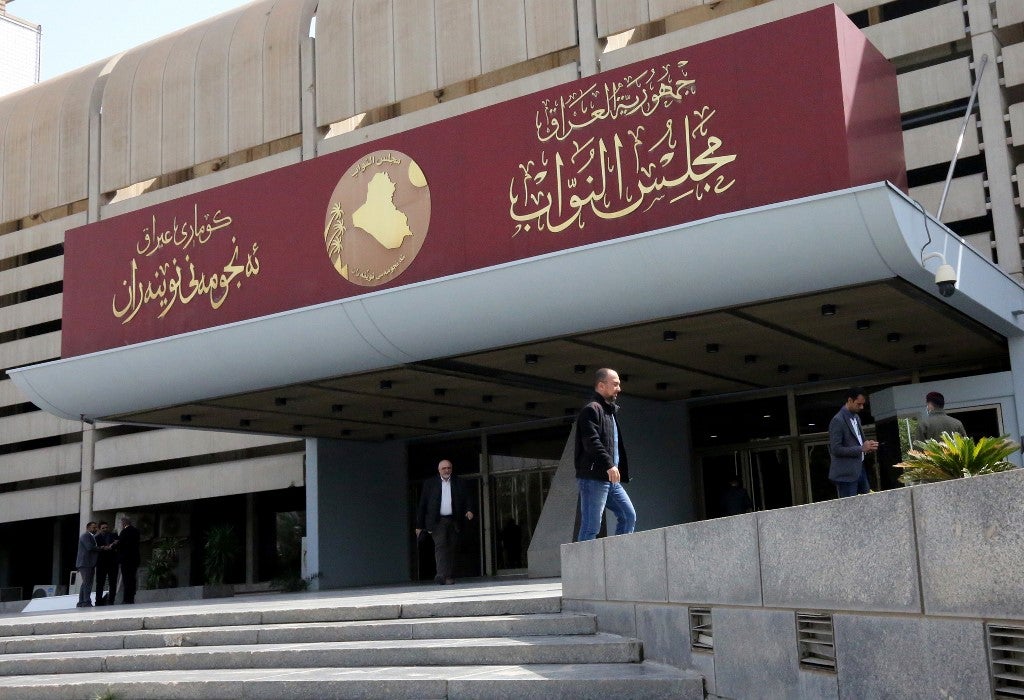 Iraqis stand outside parliament building, or Council of Representatives, in Baghdad’s Green Zone on February 27, 2020. (Photo by SABAH ARAR / AFP)

Iraqi lawmaker Ghida Kambash died Friday after contracting the novel coronavirus, parliament announced, its first member to succumb to the virus as its spread ramps up across the country.

The 46-year-old was a three-time MP from Baquba, northeast of Baghdad, and helped pass laws on education reform and social welfare.

She leaves behind four children.

Last month, parliament speaker Mohammed al-Halbussi said up to 20 deputies were confirmed to have been infected with COVID-19.

After seeing a relatively slow spread in the first five months of 2020, cases spiked 600 percent in June alone, according to the International Rescue Committee.

“The rate at which COVID-19 is spreading through Iraq is extremely alarming,” said Christine Petrie, IRC’s country director.

The country’s health system — already worn down by years of war and poor investments — has been overwhelmed by the rising numbers.

Protective equipment, respirators and even hospital beds are all running low, forcing authorities to turn expo centers, stadiums and hotels into coronavirus wards and confinement centers.

Particularly stark is the “severe shortage of oxygen”, according to the World Health Organization, which recently airlifted 300 oxygen concentrators to help Iraqi hospitals cope.

Aid has also been donated from foreign countries, most recently Turkey, the United Arab Emirates and the US.

Health Minister Dr. Hassan Salman was in the southern province of Diwaniyah on Friday to inspect hospital conditions there.

The restrictions hit its fledgling private sector hard, with an IRC survey finding that 87 percent of Iraqis were out of work as a result of the lockdown and 61 percent were already going into debt.

“Once things stabilize there will be a lot of work to do to help people get back on their feet,” said Petrie.

“Their loss of livelihoods will have taken a heavy toll on people’s mental health, which was already in a fragile state after decades of conflict and instability.”