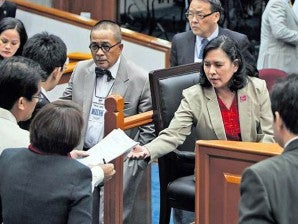 THE EVIDENCE, PLEASE Enriqueta Vidal, clerk of court of the Supreme Court and the first witness in the impeachment trial of Chief Justice Renato Corona, shows a copy of Corona’s statement of assets, liabilities and net worth (SALN) on the third day of the impeachment trial at the Senate on Wednesday. AP

Copies of Chief Justice Renato Corona’s statements of assets, liabilities and net worth (SALNs) from 2002 to 2010 were obtained by the Inquirer late last night. They are summaries without detailing properties and other assets.

Based on his SALNs, these were Corona’s total net worth per year:

All three additional properties were acquired on installment.