The administration’s allies in the House of Representatives on Friday “killed” the new franchise application of ABS-CBN, which had earned the ire of President Rodrigo Duterte for its reportage on his war on drugs and for airing a campaign advertisement against him during the presidential election four years ago.

Ging Reyes, head of ABS-CBN’s Integrated News and Current Affairs, said the network’s shutdown would impact on press freedom in the country because “press freedom is not just for us.”

“We want our public to have a choice, in what they will watch, what they will read. Competition is part of the free flow [of information],” she said.

“If this is an attempt to curtail press freedom, I believe they won’t succeed. We won’t give up, even though we will be limited in many ways,” Reyes said on dzMM radio, which continues to broadcast on Skycable, a subsidiary of ABS-CBN not affected by the lapse of its expired franchise.

All the network’s free-to-air radio and television stations in the country have stopped broadcasting since the National Telecommunications Commission (NTC) issued a cease-and-desist order on May 5, a day after the ABS-CBN franchise lapsed.

The network’s franchise application did not make it past the House legislative franchise committee, which voted 70-11 on Friday to approve the 40-page recommendation of a technical working group (TWG) to deny ABS-CBN a fresh 25-year franchise after holding 12 hearings.

As a result, the franchise “was laid on the table,” a legislative term to denote that no more action would be taken on a proposed measure.

In a statement, Speaker Alan Peter Cayetano asked the public to “read the findings [of the House committee] carefully in order to appreciate the reasons for their decision.”

He said the decision was not arrived at “without serious consideration of the overall impact it will have on the nation.”

“I pray that despite our differences, we will eventually come to respect the decision of the committee and its members, and begin to move forward in rebuilding the relationships that have been strained by this issue,” the Speaker added.

Presidential spokesperson Harry Roque insisted that Malacañang had maintained a “neutral stance” on the decision of the House members, saying the grant of a franchise was the “sole prerogative of Congress.”

Chief presidential legal counsel Salvador Panelo said the network and opponents of its franchise application had been heard as part of due process.

“This is a democratic process and we, in the executive branch, must respect its outcome,” he said. 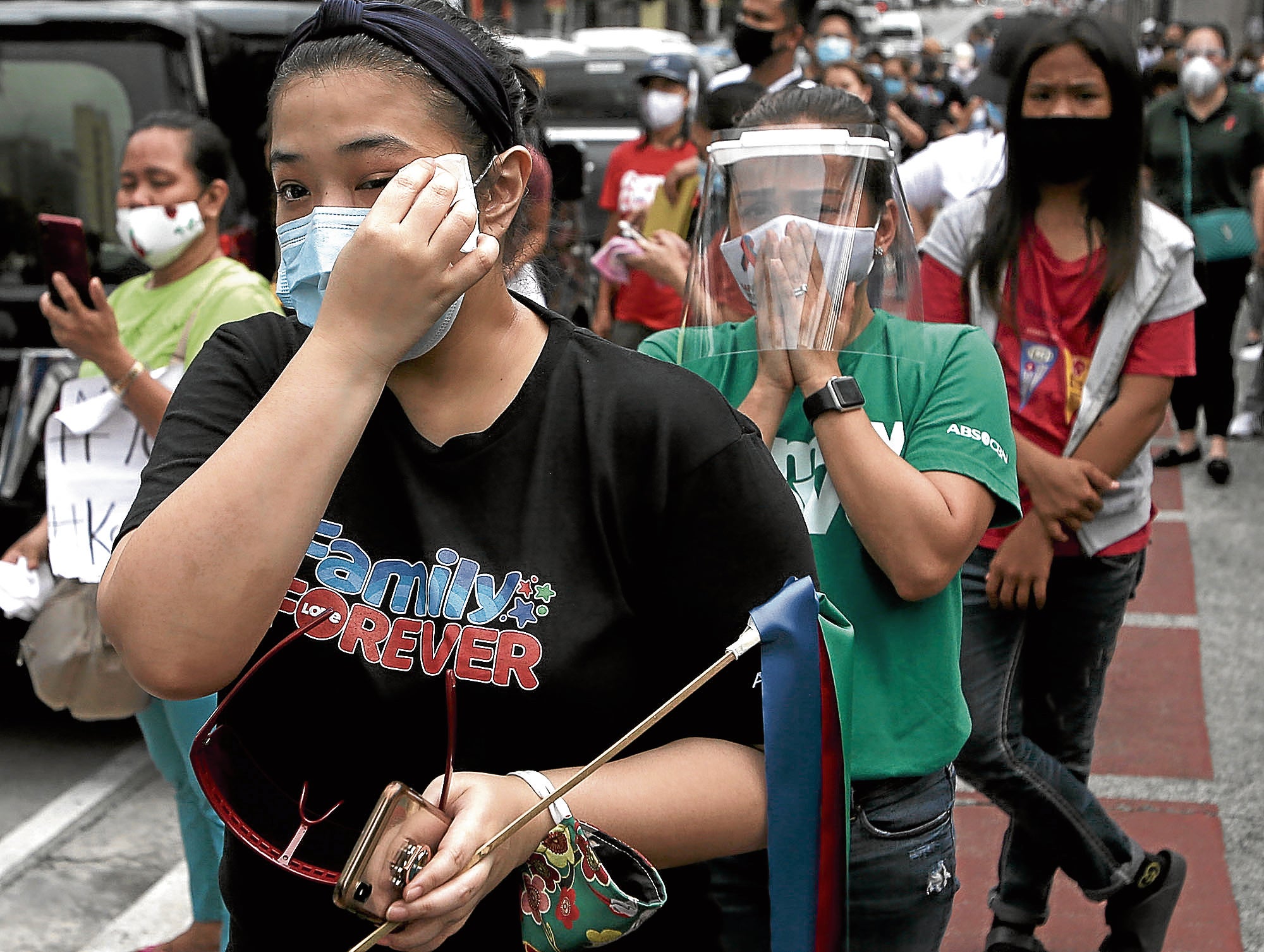 ‘KAPAMILYA’ TRAGEDY ABS-CBN employees break into tears upon learning that majority of the members of the House franchise committee approved the recommendation of a technical working group to junk the network’s franchise application on Friday. —RICHARD A. REYES

Carlo Katigbak, president and CEO of ABS-CBN, said the network was “deeply hurt” by the denial of its franchise application.

“We believe that we have been rendering service that is meaningful and valuable to the Filipino public,” Katigbak said.

But he thanked the committee “for allowing us a chance to air our side on all the issues raised against us.”

The TWG adopted most of the allegations hurled by opponents of ABS-CBN’s franchise application, which were summed up by Sagip Rep. Rodante Marcoleta on Thursday.

The TWG recommendation needed only 44 affirmative votes to be adopted by the committee.

No record was immediately made available on how many committee members were present in the session hall to vote, and how many sent in their votes via online video conference or text message.

The TWG report cited, among others, the “cloud of doubt” on the Filipino citizenship of ABS-CBN chair emeritus Eugenio “Gabby” Lopez III and the use of Philippine depositary receipts in alleged violation of the constitutional prohibition against foreign ownership of mass media. It also questioned the validity of the company’s ownership of its assets reacquired after the fall of the Marcos dictatorship in 1986.

The network allegedly also illegally sold its TV Plus boxes to broadcast digitally and also used them to offer pay-per-views, supposedly without permission from the NTC.

According to the TWG report, ABS-CBN also violated its franchise for using the franchise of Amcara Broadcasting, and used Big Dipper Design and ABS-CBN Foundation as tax shields.

“ABS-CBN earns revenues in the billions of pesos. However, through corporate layering, taking advantage of well-known tax havens, such as Hungary, Luxembourg and the Cayman Islands and even through the use of our own [Philippine Economic Zone Authority] incentives, we see that only a minimal fraction is remitted to the government,” the TWG report said.

Cagayan de Oro Rep. Rufus Rodriguez dismissed the allegations in the report, saying relevant government agencies had cleared the network of any wrongdoing during the hearings.

Senate Minority Leader Franklin Drilon said that after following the House committee hearings, he was “convinced that the only fault of ABS-CBN is it stepped on some powerful political toes, hence the sword has been unleashed on it.”

“The sword of Damocles will continue to hang perilously over other media networks. Both the legislators and the executive can wield the sword at their whim and caprice. This is when democracy starts to weaken,” he said in a statement.

“As a result, thousands of breadwinners will lose their jobs, millions their source of entertainment and information,” she lamented.

Sen. Risa Hontiveros said that with the closure of ABS-CBN “we have effectively begun to ring the death knell on press freedom in the country.”

“The political persecution of ABS-CBN sends a chilling message to Filipino media practitioners and journalists: Toe the line or get shut down,” she said.

Sen. Sonny Angara said the franchise denial “will adversely affect our economy, not just the media or broadcasting industry … as well as the advertising and creative industries.”

“It will not bring any good to press freedom and our democracy,” he said.

Officials of ABS-CBN, the country’s largest TV broadcaster only two months ago, have said the company may be forced to lay off workers starting next month if it is unable to go back on the air.

Since its shutdown, ABS-CBN’s news and entertainment shows have been limited to subscribers of Skycable, the iWant mobile app, and social media and other internet platforms.

An analyst said ABS-CBN’s remaining business will not make up for lost advertising earnings and that previously announced layoffs will likely proceed.

“From the standpoint of operations and earnings, it’s over for them,” Chris Mangun, research head at stock brokerage firm AAA Equities, told the Inquirer.

ABS-CBN retains a vast and valuable library of content, such as TV shows and movies with some of the most recognizable names in entertainment. It also has strong and multiawarded news division.

But Mangun said its viability would be impacted by its smaller reach.

“I don’t think they can survive by broadcasting on just YouTube,” he said. —WITH REPORTS FROM PATRICIA DENISE M. CHIU, MARLON RAMOS AND MIGUEL R. CAMUS