Palace reporters on ABS-CBN’s lost franchise bid: One less watchdog is one step towards tyranny 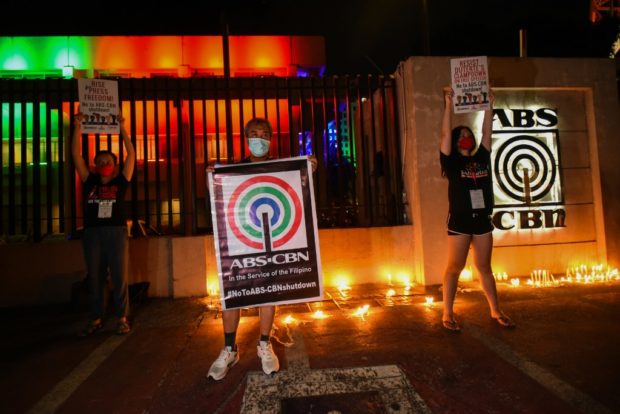 Workers of ABS-CBN and members of the National Union of Journalists of the Philippines rally to show support for the broadcaster in Manila on May 5, 2020. – The Philippines’ top broadcaster ABS-CBN on May 5 was ordered off the air over a stalled operating licence renewal, drawing fresh charges that authorities were cracking down on press freedom. (Photo by Maria TAN / AFP)

MANILA, Philippines — Journalists covering Malacañang on Friday denounced the decision of lawmakers to reject ABS-CBN’s franchise application, calling it as another attack on press freedom and a step towards tyranny.

“Today is a dark day for journalism,” the Malacañang Press Corps (MPC) said in a statement.

Voting 70-11, the House committee on legislative franchises denied Friday the consolidated bills which would have granted the embattled television network a fresh 25-year congressional franchise to resume its broadcast operations.

“We deplore the blatant and arrogant abuse of power. This is a warning to the press: Do not offend the powers that be,” the MPC said.

“One less watchdog is one step towards tyranny,” it added.

Journalists covering Malacañang denounce the lawmakers' decision to reject ABS-CBN's franchise bid, calling it as another assault on press freedom.

"One less watchdog is one step towards tyranny," says the Malacañang Press Corps.

The group said the country needs more media organizations especially in this time of health crisis, “not less, to inform the public of the dangers and risks of COVID-19 and how the government is responding to the crisis, and to make them accountable for their missteps. “

“We grieve for the thousands of employees of ABS-CBN who are now in danger of losing their jobs amid this pandemic. We stand in solidarity in their fight against this State-backed repression of private media,” the Palace reporters noted.

Although they “grieve” the death of ABS-CBN’s franchise,  the group vowed to be “more emboldened to carry the torch to carry out our mission to inform the public and keep power in check.”

“A thousand little cuts do not make us weak, these make us stronger. History is never kind to tyrants,” the MPC stressed.

ABS-CBN’s broadcast operations were ordered shut on May 5 following the expiration of its legislative franchise, in compliance with the National Telecommunications Commission’s (NTC) shutdown order.

The NTC order follows President Rodrigo Duterte’s public rants against the television network which he had repeatedly criticized for not airing his 2016 presidential campaign advertisement.