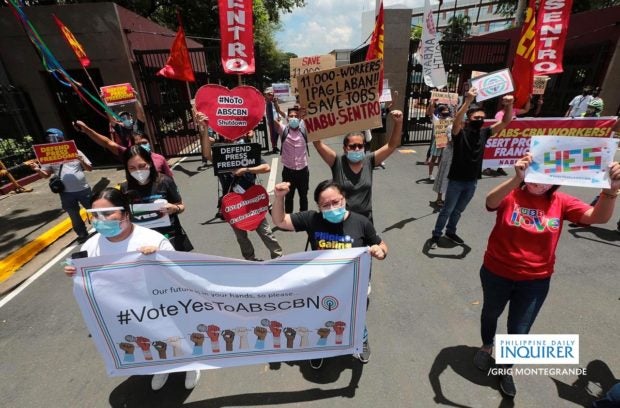 ABS CBN employees and supporters stage a caravan protest at the House of Representatives on Thursday, July 9, to appeal to lawmakers to approve the broadcast network’s application for renewal of its franchise as the House committee prepares for a summation of the 12 hearings it undertook on whether to grant the network another 25 years franchise. INQUIRER/GRIG C. MONTEGRANDE

MANILA, Philippines — After the House panel’s denial of ABS-CBN’s franchise bid, what is now the government’s plan for the network’s 11,000 workers?

Senator Nancy Binay foisted this question Friday following the denial of the franchise application of ABS-CBN by a   panel of the House of Representatives.

“I share the hurt and heartbreaks in every Filipino home, and the tears of more than 11,000 workers who were denied of hope,” Binay said in a statement.

“I can only ask our leaders what their plans are for the thousands of workers who have lost their jobs. Sa panahon ngayon, lalong kailangan maramdaman ng mamamayan ang malasakit mula sa pamahalaan,” she said.

As for the ABS-CBN family, the  senator had this to say: “What hurts you today will make you even stronger tomorrow. The die may have been cast, but it’s never the end.”

The senator, whose support for the network was vocal in the run-up to the House’s voting, remained hopeful that the shutdown of the network would usher in stronger and louder voices in its place.

Binay remained hopeful that after this event, ABS-CBN would still find its way back on air.

Despite the family’s issues with ABS-CBN in the past, Binay has repeatedly expressed her support for the  approval of the network’s franchise, which expired  on May 4.