Channel, bridge to save bird sanctuary 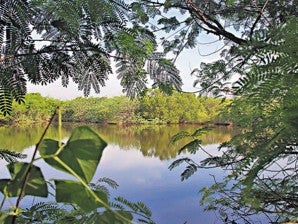 MANILA, Philippines—To conservationists, a P14-billion reclamation project and a 175-hectare rare bird sanctuary in Metro Manila may coexist if proponents of the plan agree on a compromise: a channel and a bridge.

Environmentalists and bird watchers have expressed fears that the government’s plan to reclaim 635 ha so close to the lagoon, which serves as a thriving haven for endangered feathered transients, may imperil the precious bird habitat.

“But there’s still hope for a realignment and reconfiguration of the planned reclamation,” Rey Aguinaldo, project manager of the Las Piñas-Parañaque Critical Habitat Ecotourism Area, said as he toured reporters around the sanctuary on Tuesday.

The council overseeing the welfare of the lagoon has recommended that the reclamation project give way to a waterway between the upcoming development and the bird sanctuary so as not to cut off the latter from Manila Bay, Aguinaldo said.

He noted that the environmental compliance certificate the Department of Environment and Natural Resources (DENR) had issued to the project provided that its proponents follow the recommendations of the council.

“The council is recommending that there must be a channel between the reclamation area and this sanctuary to allow water from Manila Bay to flow so that this sanctuary will not die,” Aguinaldo told the Inquirer during the tour.

A bridge can be built for crossing the channel “and that won’t cost them that much,” he added.

If the proponents are wary that a waterway will shrink the project area, Aguinaldo said “they could add up again offshore.”

“The area that will be occupied by the channel can be compensated on the other side just to save this [sanctuary],” he added.

The certificate, which the DENR issued on March 24, also stipulated that before implementation, the proponents shall coordinate with the council and the Protected Areas and Wildlife Bureau in tackling the impact of the project on the critical habitat.

The proponents have also been required to align their environmental management plans with the Manila Bay Coastal Strategy and submit a revised plan within 60 days, Aguinaldo said later in a press conference.

The DENR chairs the Manila Bay Critical Habitat Management Council, whose members include the Department of Tourism and the Las Piñas and Parañaque governments. The Philippine Reclamation Authority, proponent of the P14-billion project, is vice chair of the council.

The council is set to meet Wednesday to thresh out issues surrounding the reclamation project, said Aguinaldo, a US-trained biologist.

According to the current project design, a new business center in the sprawling 635 ha will stand adjacent to the critical habitat, which has been touted as the “last coastal frontier of its kind” in the metropolis.

A highway will also cut through the mangroves to link the new business center with the rest of Metro Manila.

“I told them that if they push through with the current design, it will cause an uproar not only among local groups but also among international organizations,” Aguinaldo said, noting that the area was more popular abroad as it attracted foreign bird watchers and eco-tourists.

“I said, ‘Let’s talk’ as there is still a chance to reconfigure … because this area is not for us, it is our legacy to the next generation [and] we have to preserve something for them to see,” he said.

The critical habitat, composed of 114 ha of mud flats and 30 ha of mangroves, is home to endangered Philippine ducks and a stopover for Chinese egrets, pied avocets and other rare birds.

Fifty-one migratory species visit the area from July to May as part of the East Asian-Australian flyway.

Between 5,000 and 7,000 birds can be seen in the lagoon in a day, according to Michael Lu, head of the Wild Bird Club of the Philippines.

Lu and other bird watchers were among those who accompanied reporters to a tour in the sanctuary, which occupies what local residents call “Freedom Island.”

The tour was hosted by the tourism department which promotes the area as a potential ecotourism destination in Metro Manila.

Tourism Undersecretary Ma. Victoria Jasmin said the department had included the critical habitat in its national tourism development plan as one of the major tour destinations in the capital.

“We would like to [preserve this] for ecotourism purposes because there’s also another niche of tourists—the environmentalists and adventure tourists,” Jasmin said.

“So whatever outcome the issue is going to have, we are very much concerned,” she added.

Keeps birds away from Naia

Contrary to fears of bird strikes expressed by pilots and airport authorities, a mangrove in the midst of a major airplane flight route is actually vital in keeping birds away from the airport and crossing the flight path, Lu said.

“You need this sanctuary as a magnet to attract birds … if you take away the sanctuary, the only area left open will be the airport and then there will be more birds there because everything is residential,” he said, citing US-based airport bird controllers who are members of the club.

Aguinaldo added that since Manila Bay was flanked by other important bird areas, birds would naturally cross from Manila Bay to Laguna de Bay.

The mangrove serves as an important stopover for these birds to keep them away from the airport’s flight path, he said.