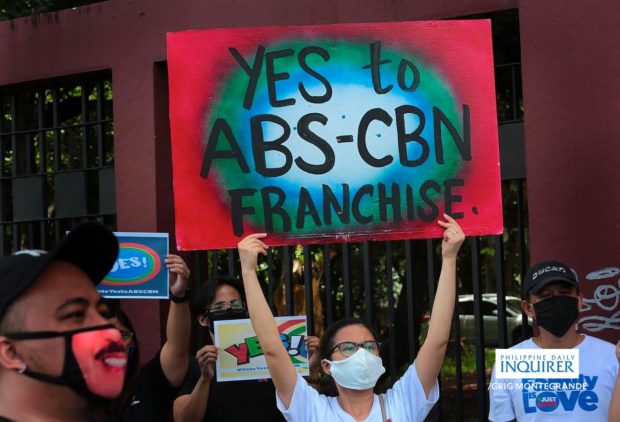 ABS CBN employees and supporters stage a caravan protest at the House of Representatives on Thursday, July 9, to appeal to lawmakers to approve the broadcast network’s application for renewal of its franchise as the House committee prepares for a summation of the 12 hearings it undertook on whether to grant the network another 25 years franchise. INQUIRER FILE PHOTO / GRIG C. MONTEGRANDE

MANILA, Philippines — Supporters of ABS-CBN would again flock to the House of Representatives on Friday morning to voice their concern before lawmakers from the House legislative franchise committee are expected cast their votes on the pending franchise bill.

The National Union of Journalists in the Philippines (NUJP) said in a statement on Thursday night that the caravan — the second in as many days — would start from the ABS-CBN’s Esguerra gate then move towards the House complex in Batasan Hills, Quezon City.

After if the fate of the ABS-CBN franchise will be decided on the committee level — which some lawmakers say would likely be on Friday — a program would be held back in the Esguerra gate, NUJP added.

The renewal of ABS-CBN’s franchise, which expired last May 4, is still in question as it is not for certain that a vote would be held on Friday, as quorum among the members is needed.

Earlier, around 300 supporters and employees of the media giant also went to the House complex’s gates, urging lawmakers to grant the 25-year franchise to ABS-CBN.

The series of protests are some of the movements launched by groups and activists since the beleaguered network was forced to stop operations after the National Telecommunications Commission (NTC) issued a cease and desist order (CDO) last May 5, ending its free television and radio broadcasts.

NTC’s CDO came despite previous pronouncements in front of Congress last February that ABS-CBN would continue operating.  NTC Deputy Commissioner Edgardo Cabarios admitted that the order came after questions on the validity of the network’s franchise were raised.

Cabarios did not explicitly mention what particular questions were thrown against the franchise, but Solicitor General Jose Calida filed a quo warranto petition last February against ABS-CBN, for allegedly hiding foreign ownership behind a corporate veil.