BuCor releases 79 amid efforts vs COVID-19

Prisoners were granted parole and have completed their quarantine
By: Dexter Cabalza - Reporter / @dexcabalzaINQ
Philippine Daily Inquirer / 05:14 AM July 10, 2020 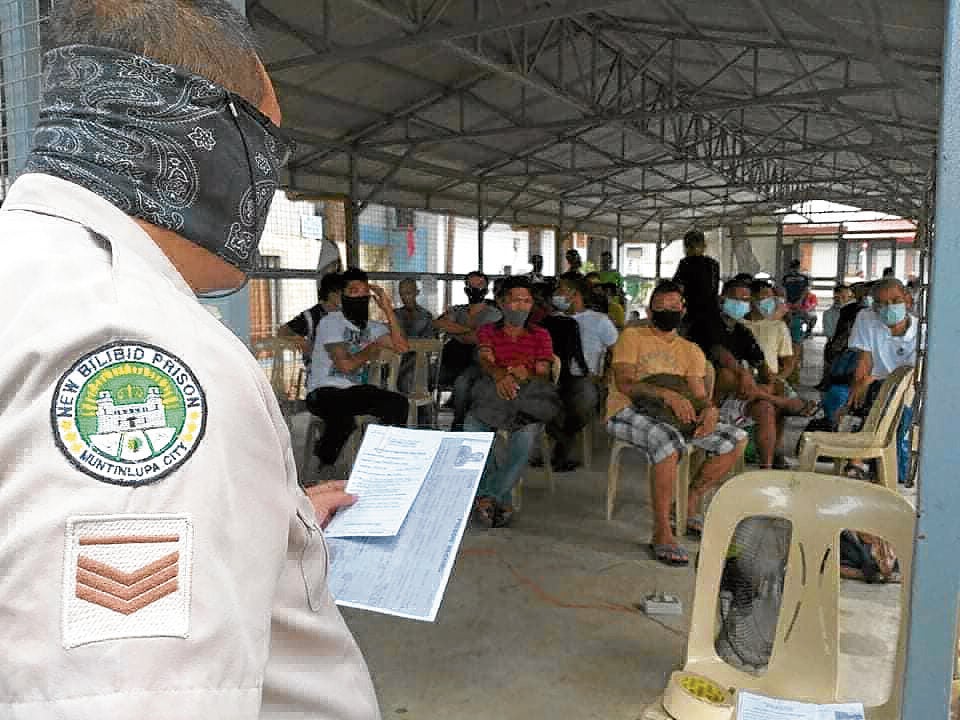 CONDITIONAL FREEDOM Bureau of Corrections inmates who were granted parole are briefed before their release. —PHOTO COURTESY OF BUCOR

An initial batch of 79 inmates of the Bureau of Corrections (BuCor) who were granted parole finally walked out of the national penitentiary in Muntinlupa City after they completed their quarantine and tested negative of the new coronavirus disease (COVID-19).

Each of the released inmates received cash aid and fare back to their hometowns. BuCor said they were escorted to their respective transportation stops “to ensure they will return home safe to their families.”

The 79 inmates who were eligible under the simplified guidelines for parole came from different security camps of the New Bilibid Prison: 16 from maximum security; 56 from medium; five from minimum; and two from the Reception and Diagnostic Center.On June 22, 162 inmates underwent rapid testing during their quarantine as one of the requirements before their release. The 79 came from that group.

“The conduct of rapid testing on these [prisoners] and further [swab] testing on those found positive shall ensure that they will be COVID-19 free when they go back [to their homes],” BuCor said.

Most of those from under maximum security were convicted of heinous crimes as enumerated under Republic Act No. 7659.

The Supreme Court has yet to hear the petition in behalf of 22 political prisoners for the release of the sick and elderly among them, especially amid the continuing threat of the pandemic.

The petition by the National Union of Peoples’ Lawyers and the Public Interest Law Center also sought the relief on bail of all the other vulnerable prisoners, including pregnant women.

BuCor has yet to post updates of COVID-19 cases in its prisons. In its last report, as of June 17, the agency recorded 301 confirmed cases, of which 223 were inmates of the NBP and the Correctional Institution for Women in Mandaluyong.Positive

The nine, all asymptomatic, were already transferred to the isolation center in Payatas, Quezon City, where infected detainees are brought, according to Chief Insp. Stefhanny Salazar, community relations service chief of the Bureau of Jail Management and Penology.Salazar said an initial 129 detainees were tested in the Pasay City Jail-Female Dormitory, one of the most congested in Metro Manila.

“We are worried that they would acquire the virus so we collaborated with the local government units to have them all tested,” she said.

According to Jail Supt. Editha Balansay of the dormitory, a detainee who tested positive on June 24 after a mandatory swab test prompted the testing of 340 other prisoners, including the nine asymptomatic detainees.

They will be returned to the Pasay jail once they test negative after their quarantine in Payatas. —WITH A REPORT FROM JODEE A. AGONCILLO