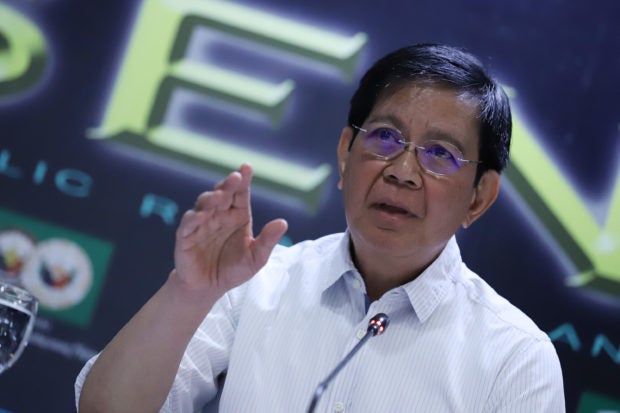 MANILA, Philippines — President Rodrigo Duterte is not authorized to unilaterally declare communist rebels as terrorists, Senator Panfilo Lacson pointed out on Thursday, noting that doing so would need to go through judicial scrutiny.

“If in ‘declaring’ a group, organization or association as a terrorist organization, the President is referring to its proscription, there is a judicial process involved — meaning full court intervention via the Court of Appeals, complete with due notice and hearing,” Lacson said in a statement.

“They think that they are a different breed, would like to be treated with another set of law, when as a matter of fact they are terrorists. They are terrorists because I finally declared them to be one,” the President said in a recent taped address.

But Lacson, one of the principal authors of the measure in the Senate, said “the burden of proof lies” with the Department of Justice (DOJ) when it comes to  proscribing any organization as a terror group.

“Even membership in a proscribed terrorist group goes through the same due process which the DOJ has to prove,” the senator added.

“On the other hand, if the President is referring to the designation of a terrorist individual, group and organization by the ATC [Anti-Terrorism Council], it does not involve arrest and detention,” he also said.

Lacson explained that a “designation” of a group as a terrorist organization is a “mere signal” for the ATC to request the Anti-Money Laundering Council to “issue a freeze order of the accounts and assets of the designated terrorist person or group.”

“That said, designation for the purpose of freezing the accounts and assets is not exempt from judicial scrutiny since the said designated individual or group can still file a petition with the CA to appeal such freezing of their accounts,” he said.

“Designation follows the guidelines and standards set by the United Nations Security Council Resolution 1373. It is not absolute or discretionary on the part of the ATC,” he added.

Lacson believes that the President’s recent remarks was a “personal opinion” and not “official.”

“The trial of the proscription case against the CPP-NPA [Communist Party of the Philippines – New People’s Army] is still pending before the Manila RTC,” he said.

“With the passage of the Anti-Terrorism Act of 2020, the trial will be transferred to a division of the Court of Appeals to be authorized by the Supreme Court,” he added.

The newly-signed law repeals the Human Security Act of 2007 and punishes those who will propose, incite, conspire, participate in the planning, training, preparation, and facilitation of a terrorist act; including those who will provide material support to terrorists, and recruit members in a terrorist organization.

Before it was enacted into law, the measure had been met with widespread opposition over fears that the measure could spur human rights violations and suppress dissent against the government.

The anti-terror law currently faces a growing number of petitions lodged before the Supreme Court questioning its constitutionality.