ILOILO CITY—As the number of residents evacuated from oil spill-affected areas reached more than a thousand, Mayor Jerry Treñas assailed the operator of the damaged power barge for failing to adequately provide for their needs.

At a press conference on Thursday, Treñas criticized Ayala-owned AC Power Corp. for its supposed failure to respond to the needs of the evacuees, warning that the city government would file criminal and administrative complaints against them.

“I’m utterly disappointed. They promised that they will take care of the evacuees,” he said.

Gabino Ramon Mejia, head of plant operations of AC Energy Corp., said the procurement of supplies for the evacuees had been delayed because of a lack of bulk suppliers due to the new coronavirus disease pandemic.

“I understand how the mayor feels. We had already approved the procurement of those needed by evacuees based on a list submitted by barangay captains of three affected villages,” Mejia told the Inquirer. 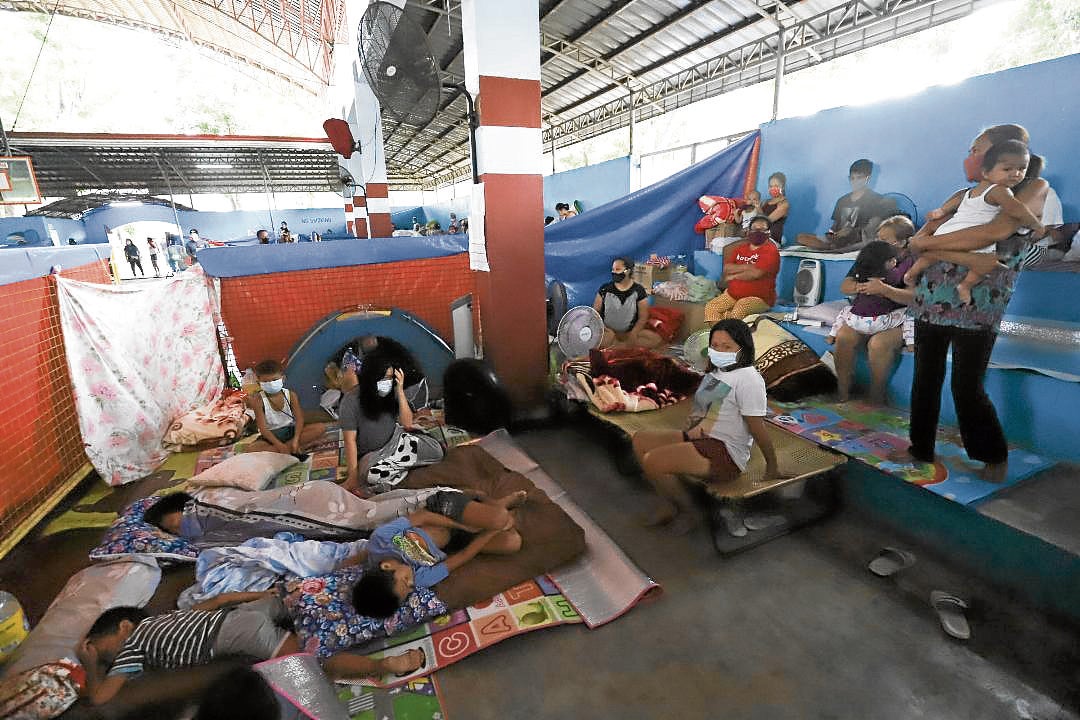 TEMPORARY HOME Iloilo City residents who left their coastal villages after an oil spill last week are staying in local schools and gyms as cleanup continues. —PHOTO COURTESY OF OFFICE OF THE ILOILO CITY MAYOR

“I have instructed our people to fast-track the procurement. The cost is not important … our priority is to answer the needs of the evacuees,” he added.

The City Social Welfare Development Office reported that as of July 8, 307 families (1,120 people) had been evacuated to five centers due to bunker fuel sludge and fumes choking their communities.

Bunker fuel leaked from Power Barge 102 docked off the coast of Barangay Barrio Obrero here after an explosion tore a hole on its hull on July 3.

The Bureau of Fire Protection in Western Visayas earlier said negligence might have led to the explosion as work, involving the use of acetylene torch, was done in an air vent connected to one of the fuel tanks.

The oil spill has spread to neighboring coastal villages of Iloilo City, at least two towns of Iloilo and Guimaras Island.

The Philippine Coast Guard station in Iloilo reported that 234,269 liters of leaked bunker fuel had been collected as of July 8. At least 1.8 hectares of mangroves in Iloilo City had also been contaminated.

The Department of Health (DOH) in the region has advised residents not to consume fish, shellfish and other seafood with oily residue or with petroleum odor. It advised them to avoid prolonged contact with bunker fuel and to refrain from consuming tainted water.

Treñas, who visited the evacuation centers on Thursday, said affected residents were staying in cramped classrooms while some slept on the floor.

He said it was difficult to observe physical distancing because of the congested situation.

“We are under a pandemic and we have to maintain health standards. All that has happened is the [responsibility] of the company,” he said.

He said the city legal office was studying possible criminal and administrative complaints to be filed against AC Power. Among the liabilities of the company was its failure to install oil spill booms around the power barge and the absence of sufficient fire safety measures as mandated by the Fire Code of the Philippines, he said.

Read Next
Cebu City hall closed for cleanup
EDITORS' PICK
OVP: Pilot’s claim vs Robredo ‘never happened’, a ‘malicious fabrication’
Honolulu Café is the cure for your Egg Tarts and Roastings cravings
Petition to reverse Comelec decision on Bongbong Marcos’ DQ case reaches SC
PH detects local transmission of Omicron subvariant BA.2.12.1
House energy committee chair Arroyo bats for cheap electricity
Luxe property: A way to build, preserve wealth
MOST READ
Congress canvassing of votes for president, VP to begin May 24
Heart Evangelista gets a ‘no’ from Chiz Escudero after asking, ‘Do I deserve a bag?’
Man posing as Marcos spox revealed to be an inmate in Bilibid — Guevarra
Closure order vs Megaworld Corp halted as firm vows cooperation with BIR – exec
Don't miss out on the latest news and information.