10 gangs hold key to the good life in prison 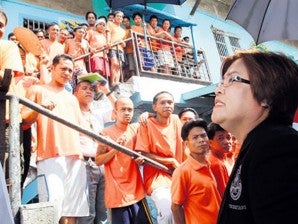 MANILA, Philippines—They may be kept under lock and key in the maximum security compound, but they themselves hold the key to a good life in the national penitentiary, including watching DVDs of the hit US TV series “Prison Break.”

Gangs lording it over at the National Bilibid Prison (NBP) control a series of kubol (cubicles) occupied by wealthy inmates, including Chinese drug lords.

“The guards themselves don’t have the keys. The inmates hold the keys,” Cavite Rep. Elpidio Barzaga Jr. fumed after a 45-minute inspection on Tuesday of the 536-hectare state penitentiary in Muntinlupa City by members of the House justice committee.

Valenzuela Rep. Magtanggol Gunigundo said prison rules were regularly being ignored, noting that he found DVDs of “Prison Break” in one of the kubol, as well as a documentary on the history of the Nazis, themes banned for recreational viewing.

Jail officials admitted at the House committee hearing later that they had relinquished much of the operational control at the heavily guarded facility to 10 gangs and to their leaders the task of maintaining order.

Supt. Ramon Reyes, the NBP chief, described the arrangement as a “best practice” to keep the peace and prevent riots.

But Justice Secretary Leila de Lima, who joined the inspection and attended the hearing, said the system was “not acceptable.”

“The gang system is perhaps acceptable. What is not acceptable is to allow them to take control of what is happening inside the compound. The NBP seems to have a very limited supervision and control of the gangs,” De Lima said.

At the hearing, she ordered the dismantling within the day of the special cubicles occupied by convicted Chinese drug lords and the rest in the next few weeks. She threatened to file insubordination charges if her order was not carried out by Wednesday.

Each of the 14 buildings in the maximum security compound is under the control of a gang. The compound has a capacity of 6,000 but houses 12,000 inmates.

They observed that while most of the cells were crammed, there were separate special cubicles with plywood partitions and apparently occupied by only one or two inmates. These had amenities, such as an electric fan, a couch and even a play area.

One cubicle had wall-to-wall mirrors that the lawmakers described as like those in a hotel. There were also toilets for the exclusive use of “VIP” inmates.

Asked about the “VIP” label, Reyes said this was an arrangement of the gangs and not of the jail guards.

At the hearing, BCJ commander Froilan Trestiza, who was invited along with three other inmates, defended the gang system, saying they policed their own ranks and cooperated with the jail officers in detecting violations, such as drug activities.

Reyes admitted that there was a “double standard” for inmates with money and those without. Generally, moneyed prisoners are allowed to have kubol constructed regardless of their sentence, the crime they were charged with or their nationality.

Reyes cited a previous plan of resigned Bureau of Corrections director Ernesto Diokno, who was also at the hearing, to dismantle these kubol and transfer their occupants to another building.

But the plan has not been implemented because the building is still under renovation.

De Lima told reporters that the demolition of all the kubol would entail plenty of planning and involve the possible deployment of soldiers to secure the process.

“That’s the operational nightmare. That’s what General Diokno proposed, but they found it hard to implement because they couldn’t figure out where to transfer them,” she said.

De Lima said the officials should also ensure that guards in the new quarters were reliable and competent and would not be bribed or influenced by drug lords. Also, she cited a need for adequate equipment like closed-circuit television cameras.

The secretary said she liked a suggestion that three-decker beds be used once all the kubol had been dismantled. “It will still be congested but not as bad as the present,” she said.

Reyes said De Lima’s order to dismantle the kubol in so short a time would be difficult to implement, citing a shortage of personnel and lack of equipment.

De Lima said the gang system had become so entrenched they had developed some sort of independence from the jail authorities.

“What happened here is it’s like all these gangs became autonomous all these years they were left on their own. They do their own thing. They are coming up with their own rules,” she said.

De Lima earlier said she had received information that some drug kingpins in the NBP had been bribing jail officials P3 million to P5 million in exchange for having their rivals transferred to far-flung penal colonies. With reports from Cynthia D. Balana, Tina G. Santos and Jerome Aning