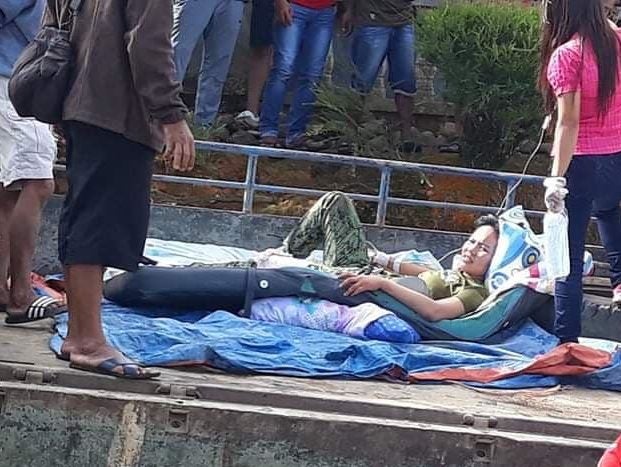 RUSHED A police officer wounded in an attack in a quarantine checkpoint in Concepcion, Misamis Occidental on Thursday morning was boarded in a truck and rushed to a hospital in Oroquieta City. —PEOPLE OF OROQUIETA FACEBOOK PAGE

Major Jonathan Astillero, spokesperson of the Misamis Occidental police office, said the police officers were manning the checkpoint in Barangay Putongan when an undetermined number of armed men fired upon them at 7:50 a.m.

Astillero said four of the eight cops assigned in the checkpoint were wounded. They were identified as Corporals Marvin Intong and Leo Gumisad, Staff Sergeant Larry Millan, and Patrolwoman Richel Taṅola.

The identities of the gunmen are also being investigated, Astillero added.

The wounded cops were rushed to a hospital in Oroquieta City but were later transferred to Ozamiz City.

They are now in stable condition, said Astillero.

He said pursuit operations were ongoing in Concepcion town.

Read Next
Pro-ABS-CBN franchise solons urge colleagues to vote on conscience
EDITORS' PICK
A gem of a residence in the new normal
Been there, done that but what’s the difference between MECQ and GCQ?
BREAKING: 3,226 latest COVID-19 cases bring PH’s total to 106,330
Water remains our saving grace right now
PNP: Checkpoints back in MECQ areas
Smart 5G goes live
MOST READ
MECQ guidelines in infographics
Doctors group to Duterte: ‘There was never a call for a revolt’
MECQ in NCR, other areas: Mass transportation suspended, quarantine pass required anew
Want higher pay? Join the police force, Duterte tells nurses
Don't miss out on the latest news and information.