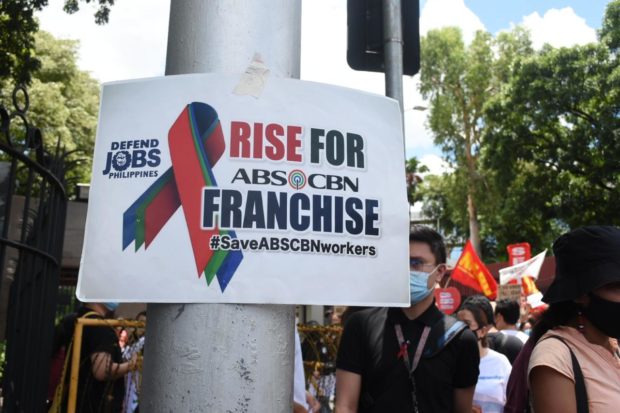 ABS-CBN workers and employees troop to Congress calling for the renewal of its franchise on Thursday. Image by Noy Morcoso

MANILA, Philippines — With all eyes now on the House of Representatives as it decides on whether ABS-CBN’s bid for another 25-year franchise will pass the committee level, what does a “yes vote” or a “no vote” on the issue mean?

For Agusan Del Norte Rep. Lawrence Fortun, a vote against the franchise would mean a vote against press freedom, access to information, and preservation of jobs.

Fortun earlier filed a resolution condemning the National Telecommunications Commission (NTC) for issuing a cease and desist order against ABS-CBN that effectively shut down the network’s broadcast operations after its franchise expired on May 4.

“A yes vote means that, kung sinuman ang congressman na nagbigay ng yes vote, yes vote means that the member is voting in favor of press freedom, number one. The member is voting in favor of giving our public access to important information and the needed entertainment especially in times of crisis. And number three, it’s a vote for the preservation of the jobs of more than 11,000 workers and the protection of more than 11,000 families, lalo na sa gitna ng pandemyang ito,” Fortun said during the Kapihan ng Samahang Plaridel media forum on Thursday morning.

Fortun said that the public should base their opinion on the pronouncements of the resource speakers invited in the hearings, as he listed one-by-one the statements of officials from various government agencies clearing ABS-CBN of the allegations thrown against the network.

(As always in our committee hearings in the House of Representatives, we always invite resource persons—these are departments, agencies and independent organizations—to help shed light in the issues pending before the committee and this is so important for us to use this as our basis because they are impartial and their opinions are unbiased and these are the official positions of the different agencies.)

“Kung titingnan natin, lahat ng mga ahensyang inimbita ng komite, pati ang mga independent organizations, they all said there was no violation on the part of ABS-CBN,” the lawmaker added.

(If we will take a look at it, all the agencies that were invited in the committee, even the independent organizations, they all said there was no violation on the part of ABS-CBN.)

The House committees on legislative franchise and the committee on good government and public accountability have so far held 12 hearings where various issues lodged against ABS-CBN, such as the citizenship of the network’s chair emeritus Gabby Lopez, the Lopez family’s reclamation of the company after the EDSA Revolution, the network’s involvement in alleged labor violations as well as tax-related issues, and their alleged political bias, among others, were discussed.

The joint committees are set to sum up the discussions on Thursday afternoon before they can vote. However, Palawan 1st District Rep. Franz Alvarez, who chairs the legislative franchise committee, said that there is no final schedule yet for the voting.

House Speaker Alan Peter Cayetano has urged lawmakers to vote on conscience on ABS-CBN’s franchise, saying that those who are for the renewal of the network’s franchise should “open their minds” to the side of the opposition and vice versa.