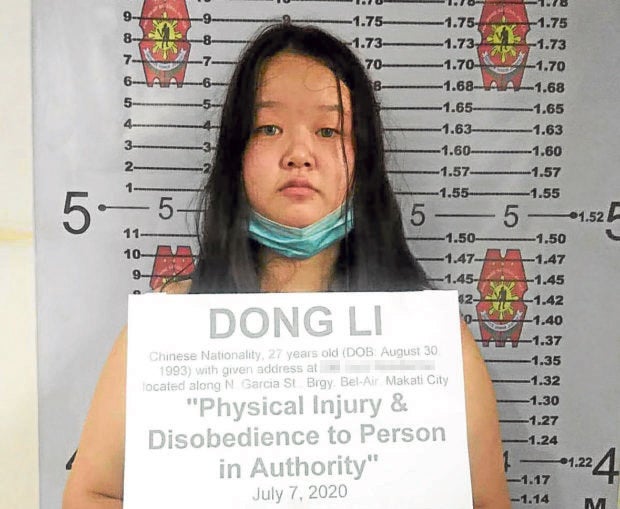 MANILA, Philippines — A Chinese woman caught in a now viral video attacking traffic enforcers and a bicycle rider in Makati City has been detained and charged by the police.

Should Dong Li be convicted of charges of physical injuries and resistance and disobedience to persons in authority and their agents, she could be jailed for up to six months and fined P50,000 at most.

A video recorded by Jayson Boongaling showed the 27-year-old Li shouting at, kicking and hitting with her umbrella two Makati Public Safety Department personnel who were manning traffic at the intersection of Makati Avenue and Jupiter Street around 5 p.m. Tuesday.

Earlier, she was stopped by the traffic enforcers when she tried to cross Makati Avenue even though the traffic light at the intersection was green.

After flying into a rage, Li, “without any apparent reason,” attacked bicycle rider Jefferson Reyes who was just passing by, according to a report by the Makati police. Reyes suffered scratches on his neck.

The Chinese woman also hit passing vehicles and the signage of a pharmacy store.