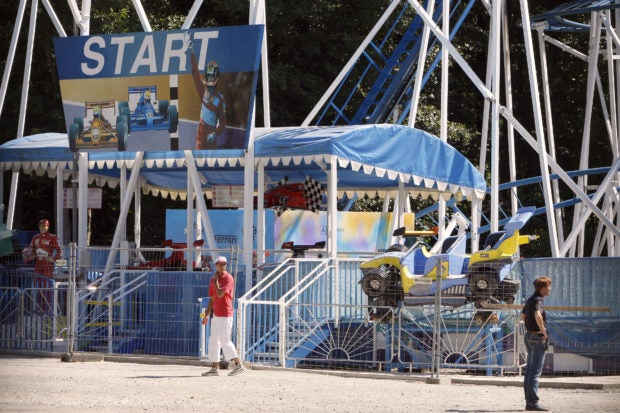 The “Coaster formule 1” amusement park ride is pictured on Aug. 23, 2009 in the Saint-Paul park near Beauvais. Image: AFP/Patrick Kovarik

A 32-year-old woman plunged to her death while riding a roller coaster at a theme park in France.

The Formula 1 roller coaster ride at the amusement park Parc Saint-Paul was “in operation” when the woman fell. Her husband tried to grab her foot after she slipped over the safety bar but he was unable to save her, The Sun reported last Saturday, July 4.

The unidentified woman’s death was also confirmed by the park’s manager Gilles Campion. According to the park’s statement, firefighters tried to resuscitate the victim but to no avail. She was pronounced dead at the scene. No one else was injured, as per report.

A witness also recounted the incident through a local French news site Le Courrier Picard on the same day, cited in the report.

“My children wanted to get in the carousel, and we heard screaming, then I saw the lady, who was strong, fall,” the witness named Farida was quoted as saying.

Another witness recalled seeing some children crying or feeling sick after seeing the accident.

The woman reportedly visited the park for the first time to mark her 2-year-old child’s birthday. The victim was with her husband, mother and sister at the theme park.

There is still an ongoing investigation about the incident. The park has also closed its doors to the public, according to the report. The park just reopened on June 6 after the country eased its COVID-19 restrictions.

Aside from the latest victim, a 35-year-old woman previously died on the same ride in 2009. The woman slipped through the safety barrier while the ride was operating, according to local reports. The park was cleared of any transgression in 2010, citing that the accident was due to the victim’s “inappropriate behavior.”

The report by The Sun cited the roller coaster’s “deadly history” through the years. It broke loose while it was in full swing in August 2005. Four people were seriously injured due to the accident. In July 2005, 11 individuals were injured due to a similar incident. Cha Lino/JB