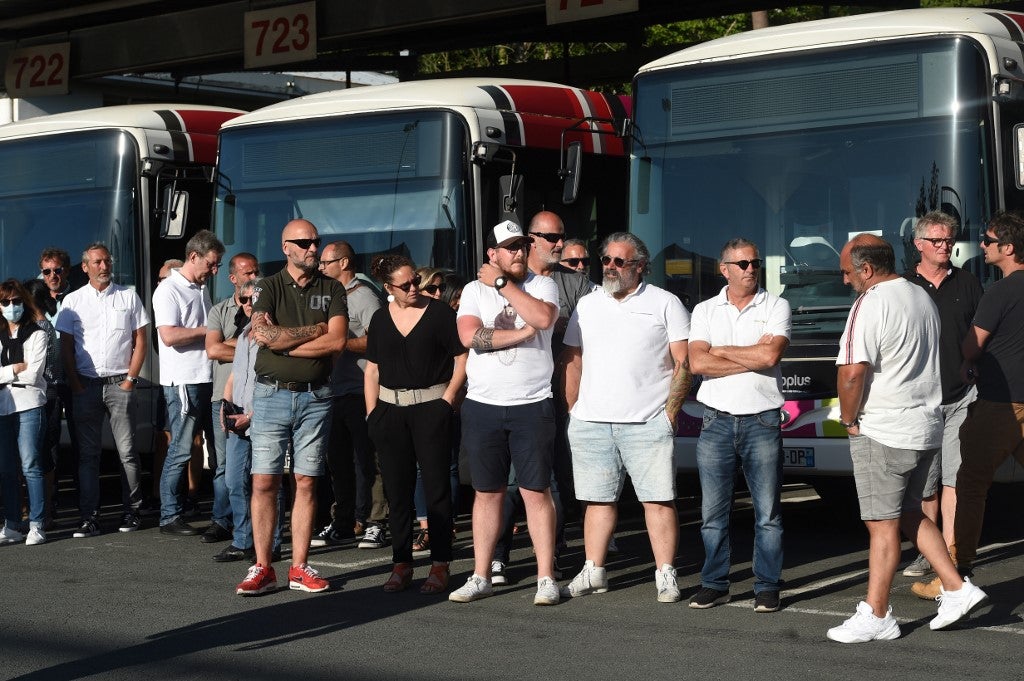 Bus drivers of the public transport network of Bayonne, southwestern France, waits for the visit of French Junior Transports Minister on July 7, 2020, a day after one of them was declared brain dead after being attacked for refusing to let aboard passengers without face masks in line with rules imposed to combat the coronavirus . (Photo by GAIZKA IROZ / AFP)

A bus driver in France was declared brain dead Monday after being attacked for refusing to let aboard passengers without face masks in line with rules imposed to combat the coronavirus.

A police source in Bayonne, near the ritzy Atlantic resort of Biarritz in southwestern France, said five people were now in custody over the incident on Sunday evening.

The source said the driver, in his fifties, tried to prevent a man, who was not wearing a face mask, from boarding the bus with his dog.

The driver also asked four other passengers, who had already mounted the bus without masks, to get off.

Face masks are mandatory on public transport in France, where the COVID-19 outbreak has claimed nearly 30,000 lives.

The driver was repeatedly punched in an assault that resulted in a serious head injury, said the source.

He was unconscious when he arrived at a hospital, and doctors declared him brain dead on Monday.

A man in his thirties was arrested on Sunday and four more people were taken into custody on Monday, said the prosecuting service.

Regional bus services were disrupted Monday after several of the driver’s colleagues refused to work in protest against the brutal attack.

“We have witnessed a particularly violent and barbaric act,” he said, calling for the perpetrators to be brought to justice and for a punishment “severe enough” to serve as a warning to others.